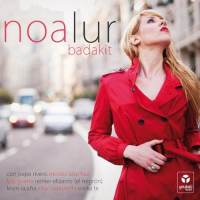 Noa Lur is a force of nature. From Bilbao, the Spanish singer/song writer is a dreamy feminine soul that celebrates the majesty of jazz through a proud demeanor and a dominating voice. With such character Lur's phrases are suave, feathery and strong. In her debut album badakit, she makes her vocal talent stand out through original compositions and revisited classics played mainly on piano.

Except "Throw It Away," where bass and saxophone are audible, and "Bobira" a dual scatting song with Vocalist Aitor Vidaurretta, all songs are piano based. Backed by three renowned Spanish pianists, Moisés Sanchez, Pepe Rivero, and Luis Guerra, Lur took an adventurous choice that amplified the magnitude of her vocal abilities. Mind blowing is her ascending voice over "Cry Me a River." The whining dying fall at the end of the song is as thrilling as the climactic point reached by Lur's vocals. In the same fashion, the meandering and syncopated locomotive song of the album "Badakit" exhibits Lur's ability to make jazz roar in her native basque tongue combined with a stunning scatting.

The album includes other original compositions such as the pop oriented song "I Remember" composed along Pianist Jorge Fontecha. Lur overrides this eight minutes track with heated passion and manages to follow the piano syncopation with fast pauses paving the ground for ascending pitch. "Bobira" is a third original and ingenious song featuring Vidaurreta. Based solely on scatting, the song is an exquisite exercise on rhythm and tempo.

As wittily arranged as the originals, the remakes have the Lur's stamp on vocals, where lengthened articulation of words is given prominence allowing Lur to dive in ascending solos that often sound operatic; quite reminiscent of Aziza Mustafa Zadeh's style. "The lady is a tramp," "Un Poco Más," "Throw it away" "Angel Eyes" and "Nica's Dream" are notable examples of the genre.

With "Badakit," Noa Lur made a promising start and stamped her own distinctive style. It needs originality to reach recognition and Noa has all the ingredients to have a successful career.

Cry Me a River; The Lady Is a Tramp; I Remember; Un Poco Más; Throw It Away; Angel Eyes; Nica's Dream; Bobira; Badakit.