By Dave Wayne
December 3, 2014
Sign in to view read count 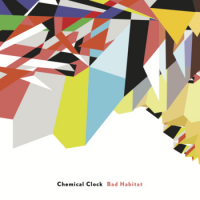 Here's another example of music that's devilishly complex, a bit bizarre and full of diverse influences (avant-classical, IDM / electronica, jazz-rock, video game music, and disco-funk, just for starters) which manages to come across as a really warm, human, celebratory listening experience. It's been a couple of years since Chemical Clock issued their eponymous debut album, and though these guys are among Seattle's busiest young musicians, Bad Habitat's monumental heaviness shows that they haven't glossed over or sacrificed any aspect of what appears to be an incredibly rigorous work ethic. More so than on their debut, Bad Habitat finds the quartet dealing with dance music. Yes, it's been hacked, shredded, glitched, sliced and diced-in some cases almost beyond recognition-but there's a giddy, happy-go-lucky energy here that almost demands you move your body to it. Somehow. Keyboardist and composer Cameron Sharif has a real knack for making really disparate compositional elements work in the context of a single brief tune. "Spring Forward"'s opening hyperactive trumpet / piano duet is followed by a sludgy recapitulation of the same line by the full band before leaping onto the dance floor, only to close with an abstract, avant-classical soundscape. That's just one example. Chemical Clock's music is nutty and unpredictable, but there's some serious logic at work here. Sharif's keyboard work is also highly distinctive; not content to merely imitate vintage keyboard sounds, he goes for huge orchestral swoops and swells and overtly electronic beeps and boops-the sorts of sounds that can't be anything but a synthesizer. The only other keyboardist I can think of who works in a similar vein is former Jeff Beck sideman Tony Hymas. Sharif shares the composing duties with drummer Evan Woodle and trumpeter Ray Larsen, who contribute one tune each. If Larsen lived in a different age, he'd be a lead trumpeter in a big band. He's got a huge tone, an incisive attack, and hits even the highest notes with uncanny ease. He's also no stranger to electronic devices and lip-to-metal extended techniques. Woodle and bassist Mark Hunter do more than negotiate the stream of off-kilter rhythmic changes, they drive the music forward and make it funky and fun.

The opening track fuses a twisted, Zappa-esque melody around some truly impressive pomp-fusion. Larsen's effects-laden trumpet imparts a metallic gleam to the malevolent opening of Woodle's "Decaviter," which dissolves into something that resembles house music (only much darker). The herky-jerky minimalism of Larsen's "Phantom Limb" gives way to an almost ambient section of held notes and chords which slowly cascades into a sweetly melodic disco section before revisiting the chunky dissonances of the opening. "Apothecary" slows the pace down a bit, while "Spider" is all goofy disco energy with its Morse Code theme illuminated by Sharif's space age synthesizer sounds. "Roy"'s catchy melody is followed by another fine trumpet solo over Hunter's octave-straddling bass and Woodle's pumping disco drums. The centerpiece of Bad Habitat is its longest tune, "Squid." A real burner from the git-go, this multi sectioned composition goes all over the musical map; from 7/8 fusion jamming to rubato sections featuring Larsen's effects-laden trumpet wailing like a lost animal over Sharif's freak show synth washes. Like the rest of the album, it works-however implausible it may seem. Bad Habitat is 21st Century jazz-rock fusion music that has not an ounce of retro-anything to it.