Babel Label: More Songs from the Tower of Sound

By JAKOB BAEKGAARD
May 20, 2013
Sign in to view read count
In a time of financial crisis in the world in general and in the music business in particular, the natural thing to do would be to cut down the number of releases and concentrate on safe and palatable productions that cater to a major audience with a predefined taste. However, Oliver Weindling's Babel Label has always swum against the stream, and Weindling believes in the music he puts out, even though it might not fit conveniently into generic boxes. As he says: "I have a belief that quality music can somehow sell, though it might take time for people to realize it. Unfortunately for my bank balance, that can be a long time."

The following six releases from Britain's tower of sound are solid gold. They might not all qualify for easy listening, but they are accessible even though they blend genres and challenge the conventions of music. Listening to the releases on Babel in a way fulfills the promise of jazz: an open and ever-changing aesthetic whose only goal is to seek beauty in all its shapes and sizes and formulate something new in the present moment of time. 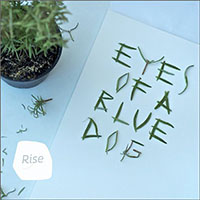 Eyes of a Blue Dog

Eyes of a Blue Dog is a trio whose name derives from a story by Latin American author Gabriel Garcia Marquez and they succeed in transferring his magical realism into music. A case in point is the opener "Mai" whose lush landscape of electronics, drums and muted trumpet becomes the blueprint for an album that mixes acoustic and electronic elements into an impulsive, yet lyrical sound.

While the trio likes to paint with sound and takes in such diverse inspirations as trumpeter Miles Davis and electronic super-group Boards of Canada, they also experiment with the structure of the pop-song and this is especially evident on the compositions where singer Elisabeth Nygård adds her enchanting voice, as on the title track where she sings a love song about "stories that are left unfolded" and being "left without a choice / your heart I cannot rescue."

While "Rise" inspires to be the perfect two-minute pop-song, "Reject the Rhapsody" is a bit more abstract with Nygård's hazy voice, a faux slap-bass, florescent trumpet lines and broken electronic beats with spacy keyboards.

Eyes of a Blue Dog makes club music for those perfect imaginary clubs where it's possible both to chill and move to the rhythm without becoming drenched with sweat. This is bonsai-electro-acoustic jazz meant to be savored and contemplated with complete dedication. 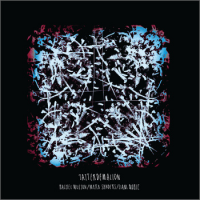 Far removed from the fields of pop, one finds the trio of saxophonist Rachel Musson, keyboard-player Liam Noble and drummer Mark Sanders. On Tatterdemalion they make up a music that is completely improvised and brutal in its honesty.

Musson screams and wails like a drunken ghost while Noble's electronic spasms on the keyboard seldom reveal that he has also earned his bread and butter in more mainstream-oriented constellations. Here, he's more occupied by texture than melody and squeezes otherworldly sounds out of his instrument. It blurbs, fizzes and fuzzes as Musson plays her throaty hymns with debt to such free jazz luminaries as Albert Ayler and Peter Brötzmann.

While the trio is capable of the cathartic moments that some will perceive as pure noise and others recognize as the cosmic screams of the universe, the key to the fascination of this combo is its sense of dynamic and development. An instant composition like the epic "The Blue Man" moves from gentle, airy saxophone and subdued percussive textures to a wailing fanfare with tribal rhythms in full action.

This is the kind of music where you will have to catch the wave or you will probably get lost, but it is also a documentation of three musicians interested in communicating and in serious search of a language that can express what they want to say. It may not be everyone that will be interested in hearing the message, but the musical language they develop is entirely their own. 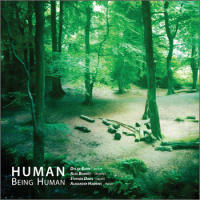 Another group that delves deep into the language of improvisation is drummer Stephen Davis' project Human that enlists that talents of pianist Alexander Hawkins, trumpeter Alex Bonney and violinist Dylan Bates. Unlike the music of Musson, Sanders and Noble, which is completely improvised on the spot, Human uses the compositions of Stephen Davis as their point of departure and creates a world where modern composition meets free jazz.

Hawkins has a strong percussive touch on the piano, reminiscent of Cecil Taylor, and the buzzing tones of Bates' violin in combination with the insistent rhythms of Davis create an interesting mixture where Bonney's burnished brass is that elusive extra ingredient that makes it all work.

While the group is capable of rocking out, their real strength lies in the more subdued moments like "Little Particles" where the hushed sounds of tangents, brushes, muted trumpet and strings create a subtle melody.

While Davis' compositions provide the structure for most of the music, there's also room for two group improvisations and both "Being Human" and "I Am a Planet" show how the musicians are capable of creating a complex web of textures where the instruments don't disappear into a muddy soup, but act as different colors on a poetic canvas that draws on all aspects of human experience, from the joyful and silly to the sombre and solemn.

Human crosses the boundary between free jazz and modern composition. Another artist that is strongly influenced by modern composition is pianist Bruno Heinen who has re-worked Karlheinz Stockhausen's Tierkreis, a composition compromised of twelve melodies, each based on a different star sign. The music is an example of serial composition and is based on tone rows. A peculiar thing about the work is that it was originally conceived for music boxes and while Heinen actually uses music boxes in his interpretation, he also brings in other instruments like trumpet, bass, clarinet, tenor saxophone and piano. In the liner notes, Heinen tells about the process of recording and arranging the music:

"This rendition of Tierkreis was recorded in April; thus the opening and closing track of the CD is "Aries." Stockhausen encouraged improvisation in performances of his work, and I have taken that idea even further by re-working much of the material. "

The use of music boxes gives a fascinating effect, as on the opener "Aries" where piano and music box can be heard in an intriguing duet. However, the addition of drums and bass give a refreshing rhythmical punch and who would have thought that Stockhausen could sound as jazzy as he does on "Taurus" that uses the format of the trio. Later, the trio is expanded into a quartet on "Gemini" where Tomas Challenger's saxophone adds a strong lyrical touch. This constellation once again grows on "Cancer" where trumpeter Fulvio Sigurtà joins and contributes to a sound of Blue Note-bop as seen through the prism of Stockhausen.

Musically, Heinen is all over the map, but he is also respectful towards Stockhausen and this is underlined by the fact that Markus Stockhausen, the composer's son, gave the work his blessing. It's easy to understand why because Tierkreis is a strong musical interpretation of a significant work that is both accessible and contemporary without becoming watered down. Heinen gives his own jazz interpretation of Stockhausen's vision and makes the music boxes swing. 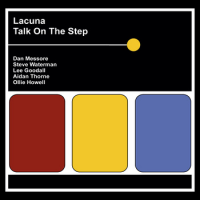 Talk on the Step

There's also plenty of swing to be found on Lacuna's Talk on the Step, which is a thoroughly modern jazz record with a solid sense of tradition. The leader of the group is the young guitarist Dan Messore, who already has one terrific Babel release under his belt: Indigo Kid.

On Talk on the Step, he continues to blossom as he immerses himself in a wide variety of sounds. For instance, the opener, "Mariposa," is a lovely Brazilian- inspired composition with acoustic guitar and dancing flute motifs and "Missing" combines the direct attack of the alternative pop ballad with the sophisticated harmonies of jazz.

A more rock-inspired composition is the epic "Wowge" where Messore's sensitive finger-playing brings Jeff Buckley to mind, but during its more than eleven minutes, the tune also touches upon laidback swing and funk.

The rhythmical foundation of bassist Aidan Thorne and drummer Ollie Howell are able to change effortlessly between a broad palette of tempi and moods. Whether playing tight in-the-pocket-grooves, sunny Brazilian rhythms or modern swing, they engage in a constructive dialogue with Messore, trumpeter Steve Waterman and flutist and saxophonist Lee Godall.

While each player in Lacuna contributes with a distinctive sound, the real stars of this constellation are Messore's compositions. There's an immediacy and warmth about the material that make the record hard to resist.

ACV might be the quintessential Babel release: a beautiful record that is impossible to narrow down or put in a particular box. What the group does instead is that it blurs the boundary between genres and expands the possibilities of what jazz can be.

With just bass, saxophone, guitar, piano and drums, the group creates a lush landscape of sound on Busk where the textural possibilities of keyboards and guitar are used to maximum effect. The group has certainly taken lessons from the masters of progressive rock and understands how to twist and turn sounds, as they do on "Giant Mice" that has its fair share of complicated licks and breaks, but yet retains an infectious funky rhythm that keeps it from becoming an intellectual exercise in instrumental virtuosity.

While the group is more than able to play all sorts of complicated music, what is really striking is bassist Andy Champion's knack for writing memorable melodies. Whether entering ballad territory with "Never Ever" or symphonic rock in the opener "Nutmeg State," there's a certain tunefulness in the midst of the bold experiments with structure and sound. Like most of the releases on Babel, Busk shows that it is possible to make music that thinks out of the box, but still retains an accessibility that opens the door for a wide audience. It's not necessary to cater to people's generic prejudices, quality is all that is needed and there's plenty of quality music to be found on these six releases.

Tracks: Mai; Rise; Marble Faces; Reject the Rhapsody; Nothing Dies with You; Little Pieces of Everything; Deliverance; Knee; Falling.

Tracks: May Be a Silken Thread; Wheel; The Blue Man; On My Road; Spinning; The Blanket Feels Woolen; You Wear Your Colours and Move.

Talk on the Step

Tracks: Mariposa; Talk on the Step; Wowge; Diga Me; A Bit of Light; Nights of Sober Solitude; Shortcomings; Missing.