BY EDWARD BLANCO
September 4, 2008
Sign in to view read count 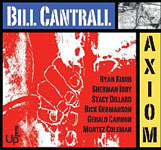 New York-based trombonist and composer Bill Cantrall, without an extensive recording resume, may not be well-known, but Axiom, his debut as leader, will change that in dramatic fashion. This is an impressive first effort for Cantrall, who successfully crafts a hard-swinging post bop repertoire of exciting originals and uncommon standards, given re-worked arrangements that make them sound almost new.

He does this with a stellar cast of players in a septet including a four-horn front line, producing a swinging sound referred to in the liner notes as being "in the classic tradition of Art Blakey's Jazz Messengers." The music leads off with the electric up-tempo title track, with plenty of solos from members of the band. Pianist Rick Germanson starts it off with quick finger play on the keys, leading to Sherman Irby's alto excursion followed by a Cantrall phrasing; a terrific opener.

"Minor Transgression" is a bit more subdued but does bring out the assertive horn section in unison before giving way to more solo performances. Cantrall takes the lead on "Shanice," delivering a gentle performance on this soft and cushy ballad piece. Two of the high points on this album come in the form of the sharp brisk-toned "Torrent," and Cantrall's soulful interpretation of Cole Porter's "After You," featuring Stacy Dillard's tenor voice followed by another sizzling alto solo from Irby and eventually punctuated by the trombonist's own contribution.

Trumpeter Ryan Kisor and bassist Gerald Cannon make their mark in convincing style with formidable solos on Cantrall's "Like I Said" and "Halfway House" respectively. There are two renditions of "Maker's," delivered in different tempos and both featuring Cantrall, in high gear on the first and in a more relaxed mode on the second. The Victor Shertzinger/Johnny Mercer standard "Tangerine" is the session's finale and what a closer it is. The group comes out swinging with Cantrall setting the stage for Irby's last bit, followed by Kisor's trumpet and Dillard's cooking tenor solo capped off with a fine run from the pianist.

This is an exceptional debut for Cantrall—frankly, not so much for his performance, which is outstanding, but for the quality of his compositions and the all around musicianship of the first-call players in the band that make Axiom one of the elite recordings of the year.