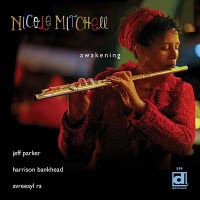 This is could be called flautist Niicole Mitchell's first blowing date, although the rarefied nature of her music renders the term only loosely applicable. It's true that, in working with a quartet, she's created the right circumstances for music more reflective of the tradition to happen, but the results are no mere reiteration of a fading blueprint—thanks, in no small part, to guitarist Jeff Parker, the catalyst which sparks the revolutionary nature of this program

There are echoes of Eric Dolphy's later music in the brief "Snowflakes," but its brevity sadly ensures that it doesn't evolve much. By contrast, the lengthy "Momentum" amounts to free bop of a singular order. Mitchell's solo is a model of florid restraint, while beneath her the rhythm trio works up a veritable storm without teetering over into incoherence.

The intriguingly odd meter of "Center of the Earth" sets Mitchell up for a dark-hued solo which highlights the evolution of her musicianship. Her breath control is now at a stage where she can go anywhere; couple this with her not being in thrall to her undoubted technique, and she provides one of the best hopes for the future of this music.

So, the blowing date notion notwithstanding, it's hard to avoid the conclusion that Mitchell is above such things. There's something innately organic about the likes of Awakening which transcends the idea, making a program that reveals a previously undisclosed aspect of the flautist's artistry. She has such a fine group to aid her in that endeavor that hopefully it will not be too long before they return to the studio.

Curly Top; Journey on a Thread; Center of the Earth; Snowflakes; Momentum; More Than I Can Say; There; F.O.C.; Awakening.