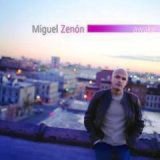 From its very first notes (played by a string quartet), Awake is identifiably Miguel Zenon: lyrical, spiritual and original. For his fourth date as a leader Zenon reunites his go-to posse—Luis Perdomo (piano) and Hans Glawischnig (bass)—but with a key change in the drum chair, Henry Cole replacing Antonio Sanchez.

The strings are artfully employed on the opener as a contrapuntal foil for Zenon's featherlight interweavings and on "Lamamilla" as a trilling texture evoking birdcalls; Tony Malaby, Michael Rodriguez and Ben Gerstein (on tenor, trumpet and trombone, respectively) make a brief cameo as a free jazz "choir' on "Awakening—Interlude." The compositions are first-rate, especially the anthemic "Camaron" (named for the great flamenco cantaor), the haunting "The Missing Piece," the Middle-Eastern-flavored "Santo" and the dense and off-kiltered "Third Dimension." Zenon's alto work is scintillating and effervescent; with a full, unforced tone he facilely negotiates the horn's total register, delivering up tightly constructed, rapid-fire lines containing chain-linked motifs and complex inner motion that, for all their logic and density, nonetheless retain a certain levity and grace.

In person at New York's Jazz Standard Apr. 30th, 2008, Zenon's group opened with a rousing rendition of "Camaron," capped by a no-holds-barred alto cadenza. Next was the hyperdriven "Residencial Llorens Torres," followed by a bittersweet "Amor," featuring a solo sax interlude in which Zenon slowly worked a minimalist melody into passages of lyric poetry, the room falling quiet in appreciation. Finally, a fast and funky "Third Dimension" found Zenon bobbing and weaving like a boxer as his improvisation intensified, Perdomo and Glawischnig providing support with rolling climaxes, and Cole launching salvos of bass drum bombs.