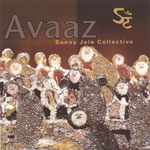 The Sunny Jain Collective is part of a growing group of musicians whose roots are from South Asia (primarily India, but also countries like Cambodia and Thailand) and are naturally cross-fertilizing with other practitioners. Artists like Vijay Iyer and Rudresh Mahanthappa are developing a new kind of Indo-jazz fusion.

The leaders of this movement are usually first-generation Americans with strong ties to the music of their parents' homeland. Rather than feeling trapped, cut off or shortchanged, and with the sound and spirit of American jazz in their minds and bodies, these musicians have fused the two aesthetics. To these ears, there is no doubt that this is jazz. What is extremely interesting are the musicians of other backgrounds who play in these bands and somehow understand the meaning of the music's source, tapping into it, giving to and taking from its deep well.

Jain's previous release, Mango Festival (Zoho, 2004), was very well received, and Avaaz, which is Hindi for "sound" or "to call," continues to build a group sound with the same players, plus the added vocals of Samita Sinha on five of the tracks. The band, although led by Jain, has the very strong presence not only of Rez Abbasi, a leader in his own right on guitar and sitar-guitar, but also Steve Welsh on saxophones and effects. Bassist Gary Wang works very closely with Jain as the rhythms shift between different South Asian and Western styles.

Jain composed most of the tracks, some to lyrics by poets such as Faiz Ahmed Faiz and Ali Mir, plus he arranged a bhajan (religious song) and a song from a Bollywood movie, Awaara. The record is rounded out by a composition by Sinha, "Wo Xiang Ni," on a Chinese poem, and one by Welsh, "Lazaro," named after the patron saint of the poor.

The band is a true collective, and its sound a wonderful blend of the very old from the East and the very new from the West—both Jain and Welsh employ some electronics for enhancement. Each track brings its own feel and surprises, and there is a constant feel of improvisation within loose arrangements.

Sinha's vocals have the most "authentic" sound, which is subverted by the band's accompaniment. Abbasi's guitar work mixes East and West through his twisting, unpredictable lines, although the sitar-guitar definitely shifts the feel more to India. Welsh's sax sound is very full with a soft edge, allowing him to sing and fill the space with a Western feel—which is, of course, subverted by everything else that is going on. Through all of this Jain pushes the band by continually mixing and slowly merging different rhythms.

Avaaz is a fine and totally engaging effort that will have you wondering whether you are in New York or New Delhi. Maybe that feeling is the gift of the jazz spirit which America has given to the world.