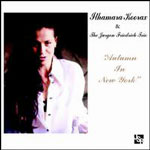 Spilling over with jazz and pop classics, Autumn in New York is probably the best program yet from blossoming Brazilian vocalist Ithamara Koorax.

Like almost every other female vocalist from Brazil, Koorax sounds influenced by Flora Purim—heard, for example, in her fearless hopscotch jumps across the endpoints of her entire vocal range. Also like Purim, Koorax has been tinted by classic jazz harmonies and phrasings—and not just by vocalists (though Ella Fitzgerald and Shirley Horn are obvious influences), but particularly by horn players and pianists too.

Koorax's impending greatness is evident from the very first cut, "I Fall in Love Too Easily," which she dedicates to Miles Davis, who famously interpreted this ballad, and to Keith Jarrett. She radiates her "ooo" vocal sound to resound, then fade like a trumpet (which happens again later in her dedication of "She Was Too Good To Me" to Don Sebesky and Chet Baker, perhaps the song's most famous interpreter). Its closing is stunning and stratospheric; it dawns on you afterwards that you simply cannot sing "I Fall in Love Too Easily," at least its last line, any better than this.

Koorax also revisits two classics from Brazil's legendary composer Antonio Carlos Jobim: two versions of "You Were Born to Be Mine (Absolut Lee)," unfurling its introduction as long and elegant as a gown for a royal ball, then swimming in the liquid pools of Jobim's soft, almost hidden rhythms ("dedicated to Jobim, of course!"); and a dramatic "How Insensitive," dedicated to Purim.

Koorax fronts a piano trio led by Jurgen Friedrich with bassist Sergio Barroso and drummer Cesar Machado. They stretch out on the up-tempo numbers, particularly the middle passages of "Walking Down the Street" and "Absolute Lee," and shift rhythms into a churning undertow beneath "How Insensitive," but for the most part their instrumental support is dedicated entirely to the vocalist.