BY GLENN ASTARITA
February 18, 2018
Sign in to view read count 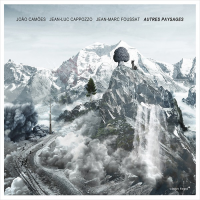 Electronics ace Jean-Marc Foussat (France) and trumpeter Jean-Luc Cappozzo (France) are established purveyors of whatever may constitute 'new music' loosely skirting the fringes of improvised jazz or perhaps, open-ended experimental frameworks. Here, they team with a willing partner, viola performer Joao Camoes (Portugal) for a session that conjures an electro-organic vibe and spans numerous emotive sensations, whether the music may be pointed to existential, sober or magical manifestations.

During the three extended pieces, the trio executes dark, foreboding and stark phrasings often contrasted with poignant free-form dialogues and Foussat's instigation of off-centered sound-shaping jaunts, due to his vast arsenal of electronics and imaginative creative sparks. Indeed, the band fuses a mosaic of alternating flows, periodically tinted with an alien musical language that is apt to play tricks on your psyche. And while listening to "De tes yeux aux miens," I initially thought my neighbor's dogs were acting up in the yard, but soon realized Foussat was up to his old tricks again by placing these sounds in the background of the mix. Hence, the barking dogs imparted a bit of realism underneath Cappozzo's hissing sounds and Camoes' sinewy passages.

The musicians' unconventional musical posture is not flooded with creaky and choppy motifs or tireless free-jazz like improv. Essentially, they play it in the middle, exemplified by the final track "Berceuse pour Manuel," featuring whispery EFX and solemn cello phrasings, designed with a trajectory that instill notions of a slow progression into a catastrophic event. They gradually raise the pitch, abetted by the trumpeter's upper register voicings, yet switch gears as Cappozzo uses a harmonic flute to help create a fractured world music vibe, taking the band into a slowly fizzing fadeout. Nonetheless, the musicians' collective brainpower and wily implementations yield a pervasive aural canvas that conveys a lasting impression.