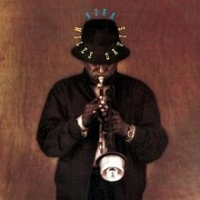 In 1984 Danish trumpeter Palle Mikkelborg composed this ambitious nine-part suite for Miles Davis, based upon his audial perceptions of the jazz legend's aura. The suite was recorded in Copenhagen with a large ensemble including John McLaughlin, percussionist Marilyn Mazur (later a regular member of the Davis band), bassists Bo Stief and Niels-Henning Orsted Pedersen, electric drummer Vince Wilbum and 23 other musicians. This exquisitely remastered reissue has corrected a prior sequencing problem, reattached a short horn intro onto track 9 and added some precious clarity to the overall sound.

Aura successfully blends Miles' electric style with the feel of his earlier big-band works with Gil Evans, another of Mikkelborg's prime inspirations. This session was one of Miles' favorites, and rightfully so. From the opening, a musical permutation of the letters "M-i-l-e-s-D-a-v-i-s," through incredible tracks that are reflective, classically or Caribbean-flavored, manic and throbbing in turn, Mikkelborg's work offered Miles the chance to touch once more upon many of the phases his career had touched and then sailed past. If any post-Bitches Brew album by Miles should be considered essential, this is the one.

Pure magic from beginning to end.