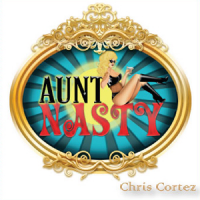 A businessman as well as an active musician, Chris Cortez has been very busy producing music through his own Blue Bamboo Music record label—so much so that Aunt Nasty is his first recording in five years. A guitarist and excellent vocalist as comfortable in rock and blues as he seems to be when performing a jazz standard, this sixth solo effort provides an eclectic selection of three vocal and nine instrumental tracks, presented in a varied landscape. There are reinterpretations of some standards such as "Caravan," along with classic rock songs including George Harrison's "While My Guitar Gently Weeps" and Jimi Hendrix's "Fire," among the album's many bright moments.

That's not all, of course, as the fine repertoire also includes short vignettes (or snippets really) of three re-harmonized Disney themes ("When You Wish Upon A Star," "Mickey Mouse Club" and "It's A Small World After All"), each ranging from between 37 to 51 seconds in duration. With an eight-man ensemble—among them, veteran saxophonist Woody Witt and trumpeter Carol Morgan—and a host of special guests backing up Cortez on guitar, the band produces a decidedly modern sound incorporating elements of Latin, Brazilian, blues and a touch of funk in a straight ahead jazz approach. The Juan Tizol/ Duke Ellington standard "Caravan" takes on a Latin feel featuring the guitarist quick string-picking moments accompanied well by drummer Guillermo Reza and percussionist James Metcalfe.

The bluesy title track moves along propelled by Witt's smart solo, well-placed harmonica sounds and Cortez on vocals for the first time. Cortez's arrangement of "While My Guitar Gently Weeps" is a highlight of the disc, performed superbly by the guitarist as he works his way through the warm melody, doing real justice to this great tune. His best vocal performance is, without a doubt, the samba-styled "The Man With No Arms," featuring flautist Warren Sneed, percussionist Will Cruz and drummer Joel Flugham. Cortez's smart and funky "Aarrgh" is quite different from the other tracks, revealing some nifty rock-like guitar lines from the leader along with excellent tenor saxophone moments from Sneed.

A spritely sophisticated arrangement of Bronislau Kaper/Paul Webster familiar standard "Invitation" is another bright spot, with Cortez and keyboardist Andrew Lienhard driving the music to its delicious conclusion. The liveliest piece of the album goes to the percussive, slightly Latin-styled "San Cruz," with Witt and percussionist Cruz providing the spark that Cortez lights with his sensational performance. The best description of this album may just come from a lyrical phrase of the title track—"We know you're bad, so bad you're good"—and yes, Aunt Nasty is quite good. Cortez may have taken five years to produce this nasty album, but the musical result is certainly worth it. Let's hope his next project comes to fruition much sooner.

Caravan; Aunt Nasty; When You Wish Upon A Star; While My Guitar Gently Weeps; The Man With No Arms; Mickey Mouse Club; Aarrgh; Invitation; It's A Small World After All; San Cruz; Ask Me No Questions; Fire.