By JEFF DAYTON-JOHNSON
January 23, 2009
Sign in to view read count 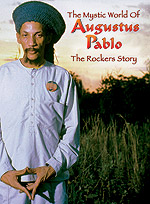 Jorge Luis Borges wrote The Approach to Al-Mu'tasim in 1936. On first reading, it's a book review of a detective novel by an obscure Indian lawyer. Except that there was no such book; the "review" is itself a work of fiction. Borges would point out the efficiency of his method: why go to the trouble of writing six hundred pages to tell a story when you could just pretend the weighty tome already exists and recount the really important parts in a fictitious review?

But pragmatism is only part of it. The Approach to Al-Mu'tasim is a story about a story. The art of the tale, at least in part, lies in destabilizing the reader's notion of what is real and what is not, and ultimately celebrates, slyly, the marvel of storytelling, and of creativity more generally.

Augustus Pablo's "King Tubby Meets Rockers Uptown," maybe the most celebrated recording of all time in the Jamaican genre known as dub, produces a similar sense of destabilization. It's a form of remix: a song about a song. The track, included on this box set retrospective of singer, instrumentalist, composer and producer Pablo's career, raises dub music making to its highest standard. For just over two minutes, the song plunges the listener into a sonic universe in which snippets of singing, guitar, bass, drums, come and go, shocked from time to time by studio effects, propelled all the while by an insistent pulse. Every time the anonymous singer from the underlying, remixed song begins to sing a line, the vocal track is clipped with a sudden stop, echoing into the abyss. The singer cannot "say" anything. "King Tubby" establishes a new aesthetic, like Borges' story, one that blurs the line between what is original and what is a version. Everything about the production calls attention to itself as a distortion of some other, more definitive, performance. What is "definitive" anyway?, the record asks. After all, it's this bizarre re-imagining, not the forgotten original, that has become a classic.

Likewise, everything about "King Tubby" draws attention to itself as a recording, rather than a performance. The DVD that accompanies this release captures an impromptu duet between Pablo (on guitar and melodica) and vocalist Hugh Mundell, sitting in a leafy riverside glade. For most listeners in North America or Western Europe at the time, that would be the stereotypical view of the Jamaican music maker. Not an avant la lettre post-modernist twiddling knobs in a darkened recording studio. But these productions, paradoxically pieced together in a setting in which many people didn't have reliable access to electricity, relentlessly exploit studio technology.

As it happens, the original recording, the ur-song that's the basis of "King Tubby Meets Rockers Uptown" is included here: it's the Pablo-produced "Baby I Love You So," by singer Jacob Miller. After all these years, hearing it is a little unsettling, like finding out that there really is a book called The Approach to Al-Mu'tasim after all. "Baby I Love You So" is followed in this collection by an instrumental version called "Cassava Piece," which relies on Pablo's enigmatic melodica playing to reconfigure the main melody. Then comes the dub classic, in which it sounds like the constituent elements of both the vocal and instrumental versions have been released into a zero-gravity environment where they begin, gradually but inexorably, to drift apart.

Much of the material on this collection falls into one of these three categories: the vocal single produced by Pablo, the melodica-laden instrumental version, and the mind-bending dub deconstruction. Pablo's best-known and most acclaimed work (outside Jamaica, in any case) lies in the latter two categories. For those who admire the better-known Pablo albums—notably East of the River Nile, Original Rockers and King Tubby Meets Rockers Uptown—the vocal tracks are a revelation. These include fine songs by reggae heavyweights (the Heptones, Jacob Miller, Hugh Mundell), gems by less well-known performers (Paul Blackman, Jah Iney, Jah Levi, Delroy Williams) and a couple of numbers sung by folks who probably never became famous for a reason.

The haunting sound of Pablo's melodica critically contributes to the mystical tinge that suffuses so many of these songs. His insistence on expressing himself with a device that was largely regarded as a toy popularized the instrument (think no further than post-punk band New Order in the 1980s for an example). More than just mysticism, though, playing the melodica is akin to Ornette Coleman's adoption of the plastic alto saxophone, a punkish, anti-aesthetic gesture. Pablo's penchant for funky, rickety keyboard sounds throughout this collection—like the clavinet on "Havendale Rock," the xylophone on "AP Special," whatever it is Pablo is playing on "Thunderclap"—is an extension of this anti-elitist aesthetic.

The classic Pablo albums are good preparation for taking on this box set. Familiar musical themes recur, as in the "Baby I Love You" / "Cassava Piece" / "King Tubby Meets Rockers" trilogy. "Stop There Jah," from the King Tubby record and "Africa (1983)" from East of the River Nile, for example, reappear here in vocal versions by Hugh Mundell. Themes and bass lines recur across the four CDs similarly.

This proliferation of versions—once again seeming to question the very possibility of definitive truth—renders the notion of an authoritative, career-spanning multi-CD box problematic, if not a philosophical impossibility. Box sets promise their avid purchasers that they will have the definitive collection of a musician's output. But in this setting, what is definitive and what is not?

Shanachie Records' attempt to match the standard set by the box sets of Mosaic Records is half-hearted at best. Who plays on these recordings? When were they released? When was Pablo born? ("Circa 1953," according to the somewhat chaotic but colorful CD booklet, and indeed, accounts seem to differ.) What are the items in Pablo's complete discography? These questions are not really answered. Pablo's first single, 1971's "Iggy Iggy," is included, but "Java," from the same year and mentioned in the notes as his first hit, is not—though a later version from the 1980s is here. (Note to jazz fans: this is not the Al Hirt Dixieland song.)

And so it goes. One can only give in to this free-floating uncertainty, just as you give in to the brooding bass line and ethereal vocal of "Earth Wind & Fire" and so many other tracks here. It turns out that an "Augustus Pablo" (in fact, keyboardist Glen Adams) had been recording and releasing singles in Kingston before Horace Swaby (the musician anthologized in the box set) adopted that identity under the tutelage of its creator, Herman Chin-Loy, producer and owner of the Aquarius record shop, in 1971. Swaby succumbed to myasthenia gravis in 1997, but this excellent box set suggests that his music is a living force, endlessly recombining and reconfiguring itself.