By John Dworkin
January 7, 2009
Sign in to view read count 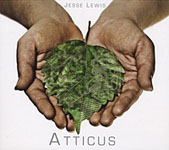 The cover art of Jesse Lewis' Atticus is a simple yet striking image: a leaf with its veins replaced by digital circuitry cupped in a pair of hands. The leaf as precious motherboard. The interpretations of the image on its own could vary, but how it relates to Lewis's recording is relatively clear. How nature fits with technology (or doesn't) can be a slippery debate in the music world and is a hot button issue in the jazz world particularly. Similar to Kurt Rosenwinkel's Heartcore (Verve, 2003) and many before him, guitarist/composer Lewis has a clear vision of combining seemingly disparate sonic worlds: electronic programming, studio effects, jazz sensibilities, sophisticated pop, improvisation, and more. Atticus is a largely enjoyable listen for eclectic listeners not troubled by a perceived impurity of style.

Bookending Atticus are two tracks with the acoustic guitar as a main instrument: "Looking Glass," and "The Pasture (You Come Too)." Of all the tunes, these are the most focused on simplicity, offering respite from the denser material. Lewis' best playing and writing come on these tracks and is calm and thoughtful—all leaf, no circuitry. "Looking Glass" serves as an introductory, gentle major key drone of sorts, whereas "Pasture" is more involved. Combining earthy harmony and melodies with guitars, pedal steel and clarinet, it's reminiscent of earlier music from Brian Blade's Fellowship Band; an evocative piece and one of the best tracks on the CD. While there is some freedom within these tunes, they're mainly composed and this adds to their charm.

The intro to the title track recalls Jon Brion's Eternal Sunshine Of The Spotless Mind (Hollywood, 2004) film score, with its warped, rainy-day windowpane melancholy more than any common jazz style. This type of harmonically sophisticated, melodic indie pop crops up in the same tune's outro and again in the beginning of "Snowflake." The rest of "Atticus" is marked by intentionally stiff, fragmented rhythms and melodic counterpoint. One section features some tricky, rhythmically displaced synthesizer harmonies which recall John Scofield's late '80s funk/fusion period.

Lewis' electric guitar improvising on "Atticus"—and throughout the CD—is looser rhythmically than the writing and makes for an interesting contrast in feel. His tone is clean and he plays it inside the changes for the most part, with occasional chromaticisms here and there. Some recognizable modern guitar influences are apparent in his playing, though at present his composing will be what distinguishes him from other artists.

As the disc progresses it becomes clear that Lewis' producer, Joseph Davancens, has played a significant role in its sound. About halfway through the realization sets in that the drum programming, sound design, and synthesizers (all by Davancens) are nearly as integral as the guitar playing and composing. The drum programming in particular is very creative and commands attention when coupled with drummer Obed Calvaire's (Sean Jones, Kurt Rosenwinkel) undeniable presence.

Looking Glass; Build!; The Adventures Of Dirt McGillicuddy; Atticus; The Robert Frost Experiment; Quiet; Snowflake; Turbulence Is Bliss; The Pasture (You Come Too).