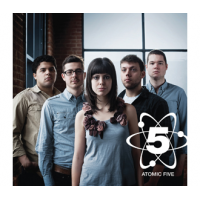 Intriguing, multi-sectioned compositions carry the day on Atomic 5's eponymously-titled debut CD. Written by pianist Beavan Flanagan, guitarist Nicolas Godmaire and saxophonist Steven Salcedo, the nine originals that comprise Atomic 5 nevertheless have a continuous narrative flow that makes for a musically satisfying and conceptually fresh listen. The playing throughout is sharp and nimble, though drummer Aaron Landsberg stands out as a real spark plug. His dexterous playing gets exuberant at just the right times. He's no slouch with the brushes, either as his work on Salcedo's epic "Waltz For St. Dominique" and on Godmaire's rockish ballad "August" attests. Rock-solid bassist Kathryn Palumbo also gives the drummer a lot of room to mess around with.

Godmaire, Flanagan, and Salcedo share the solo space more-or-less equally. All three are promising young players who—while not yet possessing jaw-dropping knockout chops on their instruments—are well on their way to developing individualistic and engaging improvisational skill sets. Flanagan has an almost classical approach to the piano—he takes his time to develop his solos and there's a sweet logic to his playing that refers to, but does not imitate, pianists such as {Steve Kuhn}} and Bill Evans. Godmaire's delicate, effects-free guitar gets lost in the mix occasionally, but he's a harmonically advanced player in the John Abercrombie/Pat Metheny mold who meshes well with Flanagan. With a pleasingly broad tenor tone, Salcedo shows flashes of more visceral post-Albert Ayler stylings on "Waltz for St. Dominique" and "Channel."

The compositions are in an ECM-ish left-of-center modern acoustic jazz vein—no free improv or fusion going on here, but nearly every tune takes an unexpected turn. There's an appealing sense of adventure to Atomic 5's music, and they rarely stay in one bag while everyone takes turns soloing. Flanagan's "Skipping Stones" starts out as a pensive, minor-key piece that seems to borrow a bit from John McLaughlin's "Follow Your Heart," from My Goal's Beyond (Douglas, 1971), only to subtly drift away into more impressionistic areas during Flanagan's fine solo. "Channel" transitions from a quick-paced, angular groove to a bucolic-sounding, molasses-slow showcase for Godmaire's eloquent guitar.

The most adventurous group interplay happens on the CD's two final pieces. "Waltz for St. Dominique" has a rather lengthy free-ish passage that Salcedo uses to take an impressively rollicking solo. "Iceberg" is a wide-open, but very pretty, tune that gives Palumbo, Flanagan, and Salcedo lots of space for expressive solos.

Atomic 5's debut CD is a very strong effort, with some impressive compositions and fine playing by all.