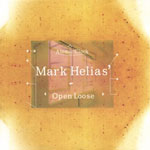 In a career spanning over twenty years, Mark Helias has worked with some interesting musical collaborations and concepts. He has constantly searched for the new and challenging, whether it has been in the company of musicians like Ray Anderson, Pheeroan akLaff, Mark Dresser and Gerry Hemingway, to name a few—or in his writing, which encompasses chamber music, big band charts and smaller collaborations like a bass duo with Hemingway.

Helias' concept of open loose sits in well with the band. Both Tom Rainey (drums) and Tony Malaby (tenor saxophone) are adventurers, like Helias. The logical impetus of the pieces lets the edge of composition open into the expanse of improvisation, making for a distinctive encounter.

Open Loose lives up to the image right off with "Subway, a tumultuous tune that flips over and about on Malaby's tenor. He honks and squawks, exhibiting a restlessness that is fanned by Rainey, and Helias moves from plucking to bowing the bass for a deeper resonance. The pitch has been set; expect the unusual. The mood, however, is something else. Helias never lets his compositions go over the top or wallow in the muck of confusion.

And so, when the next tune comes in, it turns out to be lyrical and melodic. "Chavez offers a quieter exposition, Malaby in an emotional groove that twists off into an occasional tangent. On this inspiring performance, Helias adds the contours in a short but potent solo. Ellery Eskelin comes in for "Modern Scag, a slow tune that finds the two tenor saxophonists playing neat ensemble lines, then subtly diverging before they go in for some conversation-trading ideas.

It's time for more contrast. "Many Nows is an improvisatory piece, the three musicians locked in empathic collaboration, thoughts given vent, picked up, extended and explored. The pulse is in flux, from the reflective to the upbeat, the tension palpable. The latter quality comes to the fore as Malaby skewers the harmonic line, turning it over and out, rendering a robust outpouring of feeling that slithers over skittery drums and a pounding bass line, bringing to an end a recording that engrosses as it captures the imagination.