By Jerome Wilson
March 5, 2018
Sign in to view read count 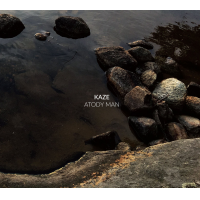 The second offering in Satoko Fujii's 60th birthday CD-a-month marathon is by her long time quartet, Kaze. The group's instrumentation of two trumpets, piano and drums would lead you to think it's heavily experimental and abstract, but while those elements are present, there is, on Atody Man, always a sense of order to this music with even the thorniest passages always resolving into logical ends.

One piece, "Morning Glow," is one of Fujii's prettier compositions. It starts with her piano picking out a delicate Japanese folk theme which is eventually picked up by trumpeters Natsuki Tamura, Christian Pruvost and drummer Peter Orins and spun with increasing speed. Then Orins takes an extended galloping drum solo and the horns return with a lurching, ominous melody before sliding back into the original theme.

"Meta-Blizzard" starts with ghostly bounces and trickles from inside the piano that are invaded by rude trumpet spitting and noisy percussion before Fujii and one of the trumpeters start a swaying, hypnotic melody. Soon syncopated rhythms emerge from the mix, the music gets more frantic and the trumpets briefly go into an angular funk-rock before the end. "Inspiration 2" starts with a lyrical but hard-blowing trumpet dialogue that leads to delirious runs and melodies by the quartet periodically broken up by metallic drones, swarming roars and violent, off-kilter drumming. "Atody Man" ends the disc on a quiet note. Metallic rubs and scrapings emerge out of the drums and piano while the two trumpeters blow small, muted unison melodies.

The dual trumpet work of Tamura and Pruvost is remarkable whether they are playing fiery, conventional open horns or going into extended techniques. They play long unison tones that decay into sour individual buzzing streams on the opening of "Hypnotique Sympathie, and have a long conversation squealing, whistling and talking through their horns on "Moving." Fujii's piano has its moments of quiet, lyrical beauty. More often though she's either manipulating the piano strings from inside or banging harsh fragments and chords that sound appropriate for the soundtrack of a Gothic horror movie. Orins responds to all this with a combination of heavy drum bashing and small percussion rustling that complements the atmosphere his partners create.

Kaze's music is a unique entity full of sudden, jarring twists and turns. Its details can be spiky and chaotic , but its hole always makes sense. This is a wild and exhilarating effort.