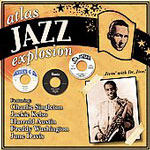 Rhythm & blues was a powerful musical force in the '50s, influencing the direction that many jazz musicians followed and paving the way for rock and roll. There was quite a market for R&B 45s, and small labels featuring eager young unknowns were able to carve out a niche in at least some jukeboxes. Many of these obscure but still worthy records remain stashed away, but Empire Musicwerks has resurrected some of the better efforts from the Atlas, Mambo and Vita labels.

None of these artists—Jackie Kelso, Harold Austin, Charlie Singleton—became household names (although some became quite successful studio musicians), but they mastered the sound that bewitched so many. All feature a solid beat and boogie woogie piano with a raspy saxophone playing swooping riffs over blues changes; add an organ and you'd have the sound that Prestige took to the bank in the next decade.

Most of these songs sound pretty similar, and that's part of the reason that rhythm and blues was so successful: it was a simple formula that was relatively easy to master and required little effort to appreciate. Much like obscure independent rock, there's a rugged charm inherent in these records that more polished efforts lack. As a companion piece to Empire Musicwerks' Jukebox Jazz, Atlas Jazz Explosion delivers.