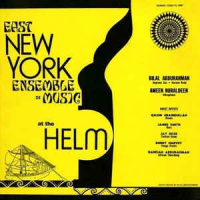 Multi-reed player Bilal Abdurahman was best known for his musical partnership with the trailblazing bassist/oudist Abdul Ahmed Malik from the late '50s into the mid-'60s. Their music—which predated better-publicized fusions of ethnic musics and jazz by half a decade—was documented on five LPs for Riverside, RCA, and New Jazz ( East Meets West, Jazz Sahara, The Music of Ahmed Abdul Malik, Eastern Moods, Sounds of Africa ).

Released on the not-for-profit Folkways label in '74, At the Helm is the only surviving document of Abdurahman's own "Black Magical Music." The puckish humor evident in the band's name doesn't so much come across in the music as it does in its kitchen sink approach to musical eclecticism. The Ensemble is actually a collaboration between Abdurahman and vibraharpist and composer Ameen Nuraldeen. Nuraldeen's compositions deftly mix the somewhat loopy, exotica-derived sounds one might find on Sun Ra's early recordings with an authoritative, groove-oriented, early-'70s Afro-modal jazz sensibility. Prominently odd amongst the more subtly odd moments on At the Helm is the cover of Freddie Hubbard's "Little Sunflower"—a minor hit of sorts amongst '70s jazz fans which daringly opens with an extended improvisation on a bizarre-sounding non-tempered Korean reed instrument. This is not done merely for exotic effect; Abdurahman plays the untamed, unnamed instrument with the same soul and passion he displays on his main axe.

The supporting players—all even more obscure than the leaders—provide an organic propulsive rhythmic base throughout. Another pleasant surprise is is the very crisp sound quality—unusual for Folkways recordings. At the Helm presents a convincing fusion of jazz, African, Asian, and Middle Eastern ethnic musics in which the immediacy and power of jazz is never diluted by the ethnic influences, and vice versa.