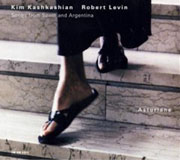 It's curious that, of the instruments in the classical string quartet, the viola is the least often heard as a leading voice. Richer and deeper-toned than the violin, but higher in range than the cello, it's the ideal instrument to interpret material written for voice. Violist Kim Kashkashian has, since the mid-1980s, been a fixture on ECM's New Series which, parallel to its regular series, focuses on music that is composed rather than improvised. Her relationship with pianist Robert Levin goes back at least as far, and the two have built a small but significant discography of duet recordings, interpreting music ranging from Brahms and Liszt to the more contemporary Hindemith, Shostakovich and Carter.

The duo brings an uncanny sense of nuance and empathy to every release, but with Asturiana, an album of Spanish and Argentinean songs, Kashkashian and Levin have not only made one of their best duo recordings, they've made one of their most compellingly human. While the translated lyrics to this series of twenty-six miniatures are provided in the liner notes, in many ways they're an unnecessary distraction, as Kashkashian and Levin capture the evocative emotional breadth of music by Manuel de Falla (1876-1946), Enrique Granados (1867-1916), Carlos Guastavino (1912-2000), Alberto Ginastera (1916-1983), Xavier Montsalvatge (1912-2002) and Carlos López Buchardo (1881-1948).

The music ranges from the spare melancholy of de Falla's title track to Granados' impassioned, but no less haunting "El mirar de la Maja (The Gaze of the Maja). Kashkashian's viola is a plaintive voice to Levin's sparse but increasingly dramatic support on Ginastera's "Triste (Sadness). Montsalvatge's "Canción de cuna para dormer a un negrito (Lullaby for a Black Baby) feels soothing, but possesses a hint of unsettled discord, whereas de Falla's "Nana (Lullaby) may be gentle in demeanor, but is unexpectedly sad in resonance. De Falla's "Polo is more urgent, more dramatic; while Buchardo's "Prendiditos de la mano (Hand in Hand) is more buoyant and joyful.

Adapting these songs for viola and piano requires more than merely finding the right way to put the notes on the page and play them; it requires the simpatico to deal with the subtlest complexities of emotion inherent in the human voice, which are difficult to emulate. Kashkashian's melodies leap off the page, while Levin's role is a different one; a more conventional supporting role perhaps, but no less inspired, telepathically moving with and motivating Kashkashian throughout.

Removed, as it is, from more conventional classical repertoire, Asturiana represents a shift in ECM's unfettered New Series. Like Trio Mediaeval's Folk Songs (ECM, 2007), it demonstrates that it's possible to adapt music from farther afield to a context more commonly associated with classical music. Two versions of the title song and "Triste make clear that the arrangements may be defined, but the elusive nature of interpretation brings new perspective to every performance.