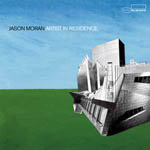 Pianist/composer Jason Moran has never made the same album twice. While his Bandwagon group with bassist Tarus Mateen, drummer Nasheet Waits and, of late, guitarist Marvin Sewell, remains a constant presence on all but his 2002 solo record Modernistic, it's the only constant in a recorded career marked by a restless insistence on trying out new things.

Artist in Residence once again puts Moran in unexplored territory. It collects various commissioned pieces from Minneapolis' Walker Art Center, the Dia Art Foundation, and Jazz at Lincoln Center. The material from the Walker Center and the Dia Foundation came from theatrical and multimedia presentations—the former incorporating work by artist Adrian Piper, the latter a collaboration with artist Joan Jonas. Over the album's ten tunes, Moran plays solo, with the Sewell-enhanced Bandwagon (augmented by trumpeter Ralph Alessi and multi-instrumentalist Abdou Mboup on "RAIN ), with Piper's sampled spoken word and Jonas' percussion. To explain the philosophical and artistic motivations of the full presentations would use every word of this review, and ultimately, Artist in Residence has to be judged here as a record.

As such, it's a mixed bag. The opening "Break Down fuses art and fun as the Bandwagon lays down a nervous and irresistable groove around Piper's sampled, one-beat-straddling phrase "break down. Piper's contribution to "Artists Ought to Be Writing is less successful; although the Moran/Piper duet couldn't exist without her words (like some of the tunes on the live 2003 record The Bandwagon, the music's created by harmonizing the rhythms and intonations of a recorded section of human speech), her words are, well, annoying—there's something smug and self-referential about an artist's art consisting of talking about artists. Moran's pianistic development of the theme once her voice cuts out is, however, nothing short of wonderful.

"Refraction 1, a duet between Moran and Jonas, is a high point. Jonas plays a host of percussion instruments around Moran's Satie-like piano, and the piece has a unique and brittle sweetness. Jonas' scrabbling, tinkling percussion may annoy some listeners, but her musicality is, if naive and intuitive, quite powerful. The recording also includes a potent Bandwagon version of the same tune ("Refraction 2 ) that's one of the best, and least self-conscious, pieces here.

The countrified "Arizona Landscape and the eerily autumnal "He Puts On His Coat And Leaves are two solo piano tunes from the Dia commission; both work especially well in this album context because they require no explanation, unlike Moran's solo piano cover of Julian Lloyd Webber's "Cradle Song, which is not improved by the addition of loud pencil scratching alongside the performance—a tribute to Moran's late mother, who used to noisily take notes during his performances. In that context, it's moving when the audible writing stops near the piece's end—but could one appreciate it if one didn't know the back story?

Most of the pieces on Artist in Residence are good. But this is difficult material to program together on one disc. It's a crowded and sometimes acrimonious blend.