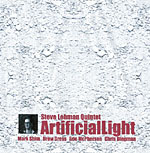 There have been some quiet rumblings about the young Steve Lehman. The New York alto saxophonist won Downbeat's award for "best alto saxophonist under 21" in 1997 and has studied under sax greats Jackie McLean and Anthony Braxton. His recent associations with his contemporaries include bassist Mark Dresser and pianist Vijay Iyer, with the trio Fieldwork. In his mid-twenties, he plays and sounds beyond his years, but what is really interesting lies in the intensity and progressiveness that make Artificial Light a gem of a slightly different color.

The balance of instruments and talented players, along with Lehman's unique compositional arrangements, make for an interesting and unconventional outing which includes elements of free-bop, swing, and modern jazz. The music for the most part consists of odd cadences, repeating riffs, and aggressive solos that work well within the framework of Lehman's ideas.

On the opening track, "Fumba Rebel," Lehman's alto repeats a staggered pattern as Chris Dingman lays down a lengthy vibe solo. The addition of the vibraphone adds coolness to the music and Dingman proves to be a most capable player. The under recorded and lush voice of tenor saxophonist Mark Shim are profound as he brings his trademarked lower register sound. Lehman and Shim are like minded horn players and create memorable horn interaction on the intricate "Alloy."

Veteran bassist Drew Gress is superb; his skilled presence is felt throughout the entire recording and his solo on the soothing "Estelle Teams" is a testament to his talents. The hippest piece goes to the stellar "Freestyle" which incorporates excellent solos, a groovacious alto/tenor horn arrangement, and vivid drum work by Eric McPherson.

While maybe not for everyone's taste, there is a special character to the recording which is laced with dreams of jazz's past but more importantly visions of jazz's future in the fertile mind and horn of Steve Lehman. Recommended.

Visit Fresh Sound and Steve Lehman on the web.