Jazz Articles about Will Vinson

An incessant stream of new artists, new ideas, revisitations of old ideas and ever-shifting technological inventions continues to push jazz onward, forward into the 21st Century. While most of today's music began taking root and developing in the turbulent jazz topographies of the last century, each new interpretation, extension and redesign today adds a new perspective, sometimes even a new dimension, to the possibilities in jazz, thereby enlarging its universe. The three members of newly conceived outfit Trio Grande just ...

2020 marks the beginning of Will Vinson's third decade of working and living in New York. Over the years the British-American saxophonist has gained wide recognition as a sideman as well as a leader, with six albums to his name in the bank. Beyond recording highly acclaimed albums for late Gerry Teekens' Criss Cross label, Vinson has appeared with the likes of Kurt Rosenwinkel, Chris Potter or Kurt Elling, to name a few. The 2012 formation “Owl Trio" featuring bassist ...

Will Vinson: Perfectly Out Of Place 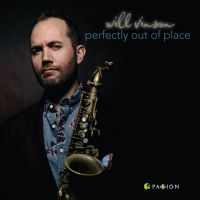 Perfectly Out Of Place--the sixth album from saxophonist Will Vinson--is a marvel of compositional design, textural beauty, and musicality. It's both in keeping with his previous work and several steps beyond and above. While Vinson is essentially sticking with his favored quintet format on this one, he's expanded his sonic palette by adding some judicious overdubs and bringing in a number of special guests--The Mivos Quartet, vocalist Jo Lawry, and percussionist Jamey Haddad. He's also upped his ... 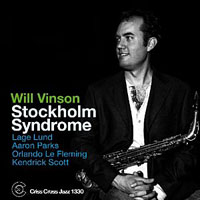 Saxophonist Will Vinson performs the oft-attempted but rarely accomplished feat of producing fresh and original music with an open affection for tradition. He carefully walks the tightrope, all the while risking falling--on one side into shallow mimicry, and on the other into art music. Stockholm Syndrome--Vinson's first Criss Cross release and an appropriately heady mixture of standards and originals--finds the alto saxophonist developing a distinct and personal lyricism. The album brings together five of New York's best ...

Will Vinson: The World (Through My Shoes)

Recorded at Freddy's Back Room in Brooklyn, The World (Through My Shoes) marks alto saxophonist Will Vinson's first live release. The music, documented over two nights, offers a genuine portrait of a working band creating distinctive contemporary music. The core of the program is comprised of Vinson originals. His writing and arranging display a keen respect for the jazz tradition, as well as an obvious fluency in the current jazz languages. Most important, however, his tuneful arrangements ...

Will Vinson: Planted and Growing in New York

Like many musicians of his generation, growing up in the rock-and pop-dominated 1980s, saxophonist Will Vinson got his indoctrination to jazz from the sounds emanating from the stereo system in his home, hearing the likes of Dave Brubeck, Duke Ellington and Count Basie from his father's record collection. He took a liking to them. Especially Basie, as Vinson started out playing the piano as a youngster. But there were a few obstacles. Vinson, 33, is a native of ... 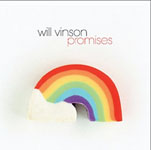 It's been five years since British expat Will Vinson released his debut as a leader, It's For You (Sirocco, 2004), but the alto and soprano saxophonist has been anything but dormant. Working hard in the New York area with everyone from Mike Stern and Chris Potter to Geoffrey Keezer and Seamus Blake, Vinson's follow-up, Promises, may have been a long time in coming, but it demonstrates Vinson's palpable growth as a player but also, and perhaps more importantly, as a ...