About Vasilis Xenopoulos Saxophonist, composer and educator Vasilis Xenopoulos is one of the most accomplished Greek jazz musicians of his generation and a genuine representative of straight ahead jazz. jny: London became his permanent home after graduating with honors from the Berklee College of Music in jny: Boston and gradually established himself as one of London's up and coming jazz saxophonists. He has worked with some of the best musicians of the international jazz scene as a band ... 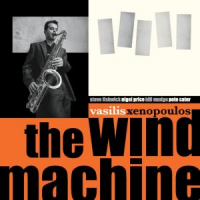 It would be easy, too easy, to write-off Greek-born (now U.K. resident) Vasilis Xenopoulos as yet another mainstream jazz musician. This would be a grave mistake because, as witnessed here in this, his second album, Xenopoulos breathes brave new life into old standards. Not only that, but these numbers are executed with superb skill. The Woody Herman band's “Four Brothers" kicks off sharply and smartly followed by “The Groove Merchant." Already the listener can discern a class act in the ...