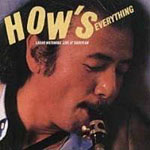 In 1977, prolific Japanese saxophonist Sadao Watanabe began recording a series of jazz fusion albums supervised, for the most part, by pianist, arranger and GRP wunderkind, Dave Grusin. A hugely popular icon of Japanese jazz since the mid-1960s, Watanabe had already recorded four such fusion albums (in between other more straight-ahead projects) when he was offered his first American recording contract with Columbia Records in 1980.The first of only two records that came out of this arrangement was ...

The packed house that greeted Sadao Watanabe at NBew York's Blue Note in August, 2008 was a testament to both his popularity and the rarity of his visits to America. Now in his mid-70s, Watanabe is still an impressive alto sax man who plays with confidence and a heartwarming sentimentality. He was appearing in conjunction with the release of Basie’s at Night, a double live CD recorded in Japan in 2007, with pianist Akira Onozuka, bassist Koichi Osamu, ...

"I want to get back to basics, I want to play saxophone. I've started to love playing straight-ahead again," Sadao Watanabe said over the phone during a break in a gig at a Japanese club. The statement might be a little puzzling to American jazz fans who know Sadao (in Japan "Sadao" is as common a one-name appellation as Miles here or Pele in Brazil)--if they know him at all--as an alto saxophonist whose albums were fairly ...