Happy New Year! First show of the month and 2020—it's time for Blue Note albums that are celebrating their 50th anniversary, being from January 1970! Lou Donaldson, Grant Green, Lonnie Smith, Andrew Hill and the Thad Jones/Mel Lewis Orchestra! Bassist and saxophonist Mark Zaleski will be in Baton Rouge at Chorum Hall on Wednesday, January 8th, and we track a tune from his latest recording. It's the start of the Charlie Parker centennial, and we'll be featuring Savoy studio tracks ... 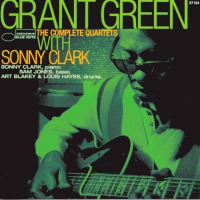 Imagine if someone discovered a stash of unreleased Beatles records 15 years after they broke up. Then imagine Apple Records released all that music in a 2-CD set. That's what Grant Green: The Complete Quartets with Sonny Clark is like. I exaggerate, but not by much. Grant Green wasn't the Beatles of jazz. But for about five years in the early-to mid-1960s, he was arguably the best jazz guitarist around. He was in the same class ... 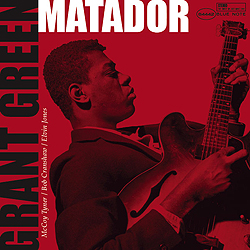 This may be the reissue of 2009: a resplendent vinyl pressing of guitarist Grant Green's Matador on two 180-gram, 45-rpm records from Music Matters. This May 1964 recording was, like many Blue Note sets, not released until many years later (November 1979 in Japan in this case) and only reached the U.S. on CD in 1990. It has not been remastered since. The record ... 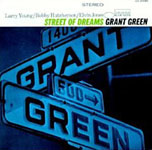 Grant Green (1931-79) is probably the most sampled guitarist of his generation, and is rightly regarded as a godfather of acid jazz. His debut, Grant's First Stand (Blue Note, 1961)--heavy on the good foot groove--was made with soul jazz organist Baby Face Willette, and by 1965, when Green recorded an album for Verve, the label was able to title it, accurately enough, His Majesty King Funk. Many of Green's post-1970 recordings were built around extended, vamp or ostinato driven jams. ... 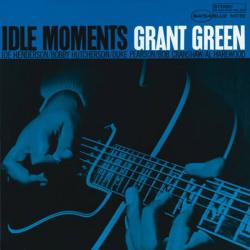 > Grant Green Idle MomentsBlue Note1964 Guitarist Grant Green is most widely remembered today as a godfather of acid jazz, a consequence of the many groove-centric albums he recorded during his career. His debut, Grant's First Stand (Blue Note, 1961), was made with soul jazz organist Baby Face Willette and in 1965, when Green recorded an album for Verve, the label was able to title it His Majesty King Funk and ... 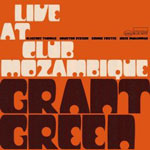 This is some apotheosis of both jazz-funk and Grant Green, just when you thought Blue Note was practicing overexposure by adding yet another Green disk to last year's three discs worth of funky compilations. But this live session, which spent 35 years in the vault, transcends all previous Grant Green funk sessions by a mile. A lot of the credit has to go to the pluperfect chemistry of the band. Green may have been Blue Note's most ...

By this time, fame and dope had taken a heavy toll on the guitarist, who'd downsized to Detroit, where Club Mozambique hosted one of his regular gigs. Blue Note, now without Alfred Lion, pulled out several stops for this recording. Producer Francis Wolff flew in from New York, as did tenor saxophone soul star Houston Person and groove-centric drummer Idris ...