Gary Willis: Something to Say

Sixteen years in Tribal Tech, the most innovative of post-Weather Report fusion bands, confirmed the status of Gary Willis as a modern-day bass icon. Picking up where Jaco Pastorius left off, Willis's explorations are stretching the possibilities of the fretless bass as a lead instrument, as evidenced on two 2007 releases, the storming Slaughterhouse 3 and his third solo album, Actual Fiction--a bass album unlike any other--both on Abstract Logix.In a revealing interview Willis lends insight into his ...

As co-founder, with guitarist Scott Henderson, of now-defunct fusion group Tribal Tech, bassist Gary Willis has never been averse to technology. By the time the group released its eponymous fourth album in 1991, there were times when it was nearly impossible to tell who was doing what. With the exception of drummers Kirk Covington (ex-Tribal Tech) and David Gomez on seven of its ten tracks, Willis goes it completely alone on Actual Fiction, an album of monster chops, penetrating grooves, ...

One might be forgiven for thinking that bassist extraordinaire Gary Willis has the titles of the first two songs on Actual Fiction the wrong way round. “Cartoon Fetish is a slightly frantic drum 'n' bass rave with a Prodigy-like bullishness that would be ideal to rock a party and rattle your neighbors' windows. The wonderfully titled “Smells Like a Party is an irresistible piece of head-bobbing funk of the type Prince cooks up, and would make a great soundtrack for ... 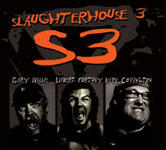 Anyone familiar with electric bassist Gary Willis (co-founder of the powerhouse fusion outfit Tribal Tech) and drummer Kirk Covington (a longtime member of that same group) will know that any saxophone trio they're involved with will be far removed from convention. Add saxophonist Llibert Fortuny, a rising star on the Spanish jazz scene, and the result is Slaughterhouse 3, an energized, take-no-prisoners album that, with its combination of potent grooves, wild electronics and freewheeling improvisation, will appeal equally to fans ...

Tribal Tech co-founder Gary Willis garnered widespread critical acclaim for his 1996 solo debut No Sweat, a release that I found easy to admire but hard to love. I've grown to love Bent, the second solo effort from the talented Texas bassist. Willis takes groove music to another level on this funky and intricate CD. Bent is a bit less dissonant and far more vigorous than its predecessor. Nine of these 11 tracks feature fat funky bottoms, hard-bopping ...