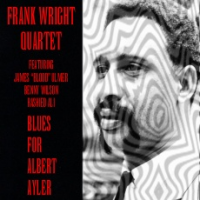 Reedman Frank Wright's eponymous first album surfaced on ESP-Disk in 1965, so it is fitting that this historic live recording also appears on the newly-revived imprint, making good its mission of releasing unheard sessions by label stalwarts, alongside newer works. Though dedicated to his erstwhile employer, saxophonist Albert Ayler, Wright's tenor saxophone also hints at the influence of John Coltrane, as much in the seven-note riff which acts as a regular refrain and launch pad during the unbroken 74-minute concert ...

The late Frank Wright focused on one aspect of Albert Ayler's work and attempted to run with it, but energy alone, however, as Ayler understood, was not a foundation strong enough to build the kind of music that holds attention. Unity, a previously unissued release which documents a live performance by Wright's quartet at the Moers festival on June 1, 1974, is an apt case in point. This music seems to lose all sense of direction early on, resulting in ... 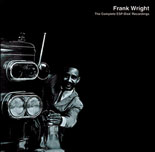 Born in Grenada, Mississippi in 1935, Wright grew up playing the electric bass in R&B bands in Memphis and later in Cleveland, where he met Albert Ayler. After listening to Ayler, Wright took up the tenor saxophone and found a new calling in the burgeoning free ...

Despite the fact that avant-garde jazz has often met with the criticism that its tonalities and rhythms put it far outside the jazz (and by extension black music) tradition, it is quite true that many of the forerunners of free jazz found their voice in blues and R&B outfits. Ornette Coleman, Albert Ayler, Dewey Redman, Noah Howard, Prince Lasha and Pharoah Sanders all came up in ...