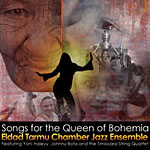 In January 2009, Los Angeles-born, Romanian vibraphonist, Eldad Tarmu took his Chamber Jazz Ensemble, featuring Israeli drummer Yoni Halevy and the Timisoara String Quartet, on tour with a superb new symphonic poem, Songs for the Queen of Bohemia. It has been on record almost since then, but sadly has not received the attention it deserves. Admittedly the world of music is becoming a crowded place, but this music deserves to be taken much more seriously. The music ...

With an uncelebrated vibraphonist at the helm of an album titled Aluminum Forest, I was bracing myself for music aimed straight toward the heart of “smooth Jazz” radio. Wrong. This is uncompromisingly straight–ahead post–bop Jazz — and I should have guessed as much from the list of personnel, which includes such prominent names as trumpeters Oscar Brashear and Jack Coan, reedmen Bob Sheppard and Jeff Clayton, bassist Dave Carpenter and the underappreciated vocalist Sue Raney (on “Hold That Thought”). Tamu ...