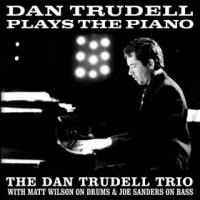 The decline of the joyously swinging piano trio has been greatly exaggerated. It may be an endangered species, but it's still out there, roaming the countryside, appearing when you least expect it, and making the occasional trip into a studio. Exhibit A is this fine recording from Dan Trudell, a Midwestern musical treasure who's renowned for his organ playing. Here, he casts aside that behemoth of an instrument and takes to the piano to deliver an ebullient program of music ...