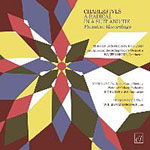 It's not difficult to see how this music influenced the likes of Frank Zappa and Van Dyke Parks; but on a profound level, the influence should not be overplayed, as it works to ...