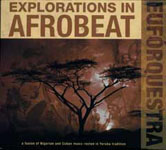 The second release from this seven-piece ensemble seems quite purposeful. Subtitled A fusion of Nigerian and Cuban music rooted in Yoruba tradition, it explores the deep connection between West African Afrobeat and Afro-Cuban music channeled through the religious, ceremonial music of the Yoruba tradition of West Africa.

Purposeful? The detailed liner notes sure seem so. For example, they explain that the Yoruba are the largest single ethno-linguistic group in Nigeria and the second largest in Africa, and that ...