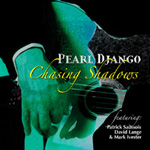 Pearl Django's very name should give you a pretty strong clue about where the group derives most of its influence. Indeed, the band's eighth release, Chasing Shadows, continues to mine the fertile territory laid by Django Reinhardt and Stephane Grappelli. As always, the playing is expert, with a palpable sense of joy evident in the exploration of music these players obviously love.

A melancholy mood pervaded the recording of Chasing Shadows, owing to the death of founding member ...