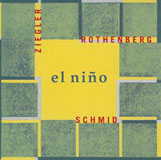 According to Meinrad Buholzer's liner notes, El Niño is, in weather terms, a habitual pattern of intermingling air currents and water temperatures that affects the Pacific Ocean and west coast of Latin America. This serves as a most suitable title for the music of the album, which represents a highly communicative and spontaneous meeting between three virtuoso wind instrumentalists: reedist Peter A. Schmid, flutist and fellow Swiss resident Matthias Ziegler, and New York-based woodwind multi-instrumentalist Ned Rothenberg.