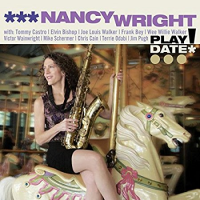 When Paul Williams released “The Hucklebuck" in 1949, it not only became a national dance craze, but also started the popularity of the tenor sax players, or the “honkers," during the golden age of rhythm and blues. The honkers had incredible chops and technique, developing a certain style and sound, that was raucous and raw; appreciated by live audiences, it leant itself perfectly to increasing radio play and record sales. Saxophonist Nancy Wright has been an authentic honker on the ...