There's something other worldly about this collaboration between innovative jazz vocalist Tom Barton and guitarist/composer Diego Villalta. Recorded in Osaka and inspired by the duo's experiences touring Japan the collection is wholly improvised, showcasing a broad range and variety of styles yet remaining coherent enough to suggest it could only have been this way. Barton describes it as “a free-jazz aesthetic, featuring extended vocal techniques and live looping, and electric guitar and FX" which is certainly true, if a little ...

This is the second album by Australian vocalist Tom Barton, the first being Aspirations (2014) and is an entirely improvised affair. On Connections Barton shares the credits with fellow countryman Diego Villalta on guitar and was recorded at Studio Osaka Recording, Osaka, Japan, whilst the pair were on tour in early 2015. Harmonium-like looped notes precede Tom Barton's wordless pellucid tenor vocals on the opening track “Trust." Any anticipation, garnered from this first offering, of the session being ... 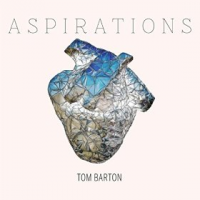 Australian vocalist Tom Barton aspires to blur the lines between genres on this debut. Electronic and acoustic thoughts merge and co-exist beautifully, improvisational elements are born around concrete expressions, and in the middle of it all sits Barton, putting his poetry in motion with beautifully clear-headed vocals. While the gist of many an album can be gleaned from a single track, Aspirations doesn't work that way. If someone were to simply stumble upon Barton's take on “Spencer ...