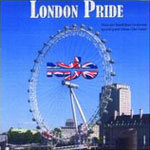 As Great Britain's superb National Youth Jazz Orchestra is now a mature forty years old, it seems appropriate that it should honor the city of its birth, even though director Bill Ashton writes that London Pride was occasioned not by the orchestra's inexorable advance toward middle age, but rather by London's having won the right last July to host the 2012 Summer Olympics, an achievement that was tempered the following day by a deadly attack on the London underground transport ...

NYJO Featuring Atila the Killer Diller: Something Old, Something New

Great Britain's superlative National Youth Jazz Orchestra, which celebrates its fortieth birthday in October (how the time does fly!), has had a number of topnotch vocalists through the years, most of them female--Jenny Howe, Annabel Williams, Jacqui Hicks, Lorraine Craig, Sheena Davies, Sumudu Jayatilaka--and now comes their male counterpart, personable Atila Huseyin, nicknamed by the band Atila the Killer Diller.

To me, Atila hasn't yet earned the status of Killer Diller, but I'm a tough sell, having grown up listening ...

There are at least four aspects of any new album by Great Britain’s superlative National Youth Jazz Orchestra that any prospective listener can be sure of without even opening the package: (1) it will be marvelously performed; (2) it will be immaculately recorded; (3) it will be generously timed; and (4) it will embody some of the most wonderfully written and harmoniously spectacular big-band arrangements one can envision.

Jasmine, the twenty-first NYJO album in this reviewer’s library, is certainly no ...

Unaccustomed as we are to hearing Great Britain’s superlative National Youth Jazz Orchestra play a supporting role, it’s for a good cause here — the debut recording of the band’s exciting young vocalist (nineteen years old when the recording was made), Sumudu Jayatilaka — and NYJO performs its assigned tasks with typical dexterity and aplomb. The problem is that the band is much better recorded than Sumudu, thus the lyrics are often hard to comprehend, especially at swifter tempos. Don’t ...

My first thought on hearing a new recording by Great Britain’s remarkably talented National Youth Jazz Orchestra (the collection numbers 16) is always, “This has to be the best thing they’ve ever done,” followed immediately by “I can’t believe everyone in that band is under 25, and that many of them are still teen–agers.” Musicians their age simply aren’t supposed to play with that kind of poise, maturity, precision and know–how. But they do. And many of them are terrific ...