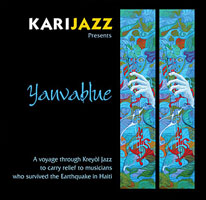 In attempt to assist the Haitian jazz artists after the devastating earthquake of January 12, 2010, the Karijazz label has released Yanvablue , a double-disc production featuring selections by the best Kreyol Jazz musicians, who cleared and donated the songs, complete with extensive liner notes and musician credits. These musicians remain active, in spite of the ongoing hardship and heartache in their homeland. The first disc opens with tenor saxophonist Buyu Ambroise, who is considered the country's ...