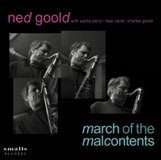 Mitch Borden--the leading light behind New York's aptly-named Smalls jazz club--has a pretty cool policy: On weekend nights before the main show begins, he gives stage time to bands that he believes deserve more exposure. Borden also personally works the sidewalk outside the West 10th Street establishment, urging passersby to come in and give these groups a listen. One band that's been given the extra time is the Ned Goold Quartet. Borden has an obvious affection for the tenor saxophonist's ...

Tenor saxophonist Ned Goold's tap runs hot and cool, combining hard bop fire with laid-back, left-coast tonguing and tone. His new release on Smalls Records, March of the Malcontents, is his second for the label and fourth overall as a leader. Unlike his earlier offerings, all pianoless trios á la Sonny Rollins' A Night at the Village Vanguard or Joe Henderson's The State of the Tenor, March features the fluid fingers of pianist Sacha Perry, along with a rhythm team ...

Ned Goold: March of the Malcontents

Ned Goold communicates easily with his audience. Maybe it's the experience that he's gained while coming up as a key member of the Harry Connick, Jr. Big Band. Or maybe it's just the pleasant opportunities that he's had in New York, enjoying mainstream trio and quartet work for audiences that truly appreciate straight-ahead jazz and its traditional framework. Theme and variations, solos around the room, head-bobbing rhythms that carry the day, and plenty to say from the leader and his ...

Charles “Ned" Goold is as distinctive an inside-outside tenor player as there is, and he should be a household name given the luck he's had with employment. Besides fronting his own trio on several CDs, he has been a mainstay of Harry Connick Jr.'s bands since the early '90s. Goold's unique tone combines something of the cool, sharp delivery of Sonny Rollins and Archie Shepp with the breathy insistence of Ben Webster and subtle phraseology of Gerry Mulligan.