A Big (Band) Swinging Christmas! is at least the tenth holiday album recorded by the peerless arranger Chris McDonald's impressive Jazz Orchestra--but the first one whose title has been amplified by an exclamation mark. Could it be that this one is extra-special? That's hard to say, as the albums that preceded it have all been remarkably well-designed and pleasurable. And yet... there is that exclamation mark. Before proceeding, it should be noted that McDonald is a maven ... 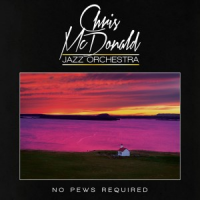 A glance at the name and song titles on Chris McDonald's new album might lead to an assumption that this is a Christian manifesto masquerading as big-band jazz, when in fact the reverse is true--McDonald, a superlative arranger, happens to be a man of faith who uses Christian themes as the basis for some of the most powerful and exhilarating big-band music you're likely to hear anywhere. This is in every respect the Chris McDonald JAZZ Orchestra, and the emphasis ...

These are the third and fourth albums recorded for Green Hill Music by Chris McDonald, one of the finest big–band arrangers you’ve never heard. But unlike the other two ( Big Band Hymns, Big Band Christmas, reviewed in November), there’s nothing special about them. Nothing new either. After all, the world hasn’t exactly been holding its collective breath waiting for fresh arrangements of “Stompin’ at the Savoy,” “In the Mood,” “A String of Pearls” or the other chestnuts re–roasted by ...