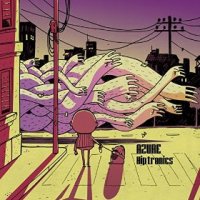 Such is the musical shift between Azure's When She Smiles (Azuremusic, 2009) and Hiptronics that they sound like different bands; effectively, they are. The main songwriter, classically influenced pianist Pierre-Francois Blanchard has been replaced by keyboardist Federico Solazzo and only co-founder, guitarist Rogier Schneemann remains from the original group, which has grown to a quintet with the addition of trumpeter Rik Mol. In interior design terms it would be akin to gutting a property and going for a futuristic styling ...

Azure is a Netherlands-based quartet formed in 2006, and When She Smiles is its second release. Nine original compositions--seven penned by pianist Pierre-Francois Blanchard, and two by guitarist Rogier Schneemann--take the quartet through lyrical terrain. Although there are no overbearing influences on the music, there is a classical jazz overtone to much of the playing, and the ghosts of the Modern Jazz Quartet linger somewhere below the surface. There is also a distinct modernism at the core, and the appeal ...

When Pierre-Francois Blanchard (piano) and Rogier Schneemann (guitar) met at the Royal Conservatory of The Hague in 2006, they forged an immediate musical bond. Shortly thereafter they pulled in David Barker (drums) and Eric Heijnsdijk (bass) to form Azure. The band released their debut recording There Were Stars (Azuremusic) in 2007. On their second release, When She Smiles, the band enlists Antonio Pisano on drums.

Azure's music is informed by different strains. The music here, all of which ...