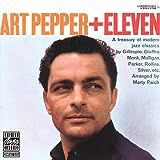 Only a handful of jazz recordings can be described as truly classic. Art Pepper + Eleven: Modern Jazz Classics is a member of that handful. Recorded between March and May 1959, + Eleven has the distinction of being excellent on multiple planes. One is Pepper himself. A journeyman multi-reedist who was already a veteran of big bands lead by Gus Arnheim, Benny Carter, and Stan Kenton, Pepper was reaching his first pinnacle as an artist when + Eleven was recorded. This recording falls chronologically between Art Pepper Meets the Rhythm Section (Contemporary CCD-7532-2) and Gettin' Together (Contemporary OJCCD-169-2) in the Contemporary catalog. This trilogy alone would have established Pepper's reputation as the finest post-Parker alto saxophonists, let alone all of his exceptional comeback recordings of the late '70s and early '80s that followed a decade of incarceration because of Pepper?s well known heroin addiction. Pepper's tone during this period was dry ice-cool, very expressive and brilliant.

A second source of excellence in this recording is the presence of the late Marty Paich as the arranger. It was a monumental task that Mr. Paich undertook to mold these often craggy bebop tunes into the engaging big band vehicles they became under his pen. Denzil Best's "Move" simply jumps from the speakers. It is comparable to Miles Davis 1949 Nonette recording of the same song, except that Paich and Pepper add a hard shine to the soft bop of the song. Paich?s French Horns on Monk's "'Round Midnight" recalls both Gil Evans and Claude Thornhill before him, ensuring that lineage of thought remained intact. "Four Brothers," "Bernie's Tune," "Walkin' Shoes," and "Anthropology" are all treated as high art by artist, arranger and band alike.

Speaking of the band, this is the third mark of excellence in this recording. A Who's Who of West Coast musicians, it is fairly easy to pick out Pete Condoli's and Smiling Jack Sheldon's trumpets or Bill Perkins's tenor saxophone. Russ Freeman provides the piano as he did on several other Pepper offerings. A Big Band in all but name, this group of musicians was as essential to the historic significance of this recording as the leader and arranger.

This release of Art Pepper + Eleven: Modern Jazz Classics is part of Fantasy's effort to release remastered masterpieces from its vaults. All of the alternate takes are released, as they have a several earlier offerings. The sonics of this release are exceptional. The drums and bass are clear and apparent and the space around Pepper and the other soloists is well defined.

Visit Fantasy Records and Art Pepper on the web.