By Russ Musto
October 16, 2005
Sign in to view read count
Together these three reissues demonstrate that although each of Blakey's bands maintained a similar sound they also possessed their own individual identities. 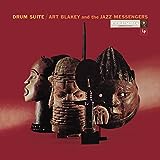 Drum Suite is a unique entry in the Blakey discography. Originally comprised of two sessions - one debuting Blakey's first percussion ensemble, the other with the unit featuring Bill Hardman, Jackie McLean, Sam Dockery and Spanky DeBrest - this reissue appends a third date including two rare tracks and a previously unissued alternate take by the short-lived group with Donald Byrd, Ira Sullivan, Kenny Drew and Wilbur Ware. Although both of the quintets offer some typically swinging Messenger material, it is the percussion ensemble that makes this disc worth picking up. Papa Jo Jones, Specs Wright, Sabu Martinez, Candido, Ray Bryant and Oscar Pettiford join Blakey for three loosely interwoven pieces. The work begins with the leader's "The Sacrifice , which opens with Wright's tympani and Sabu's Swahili chant and progresses into a rumba that includes a previously excised Ray Bryant piano solo. Bryant's "Cubano Chant is dramatized by a group vocal and a series of exciting percussion solos and Pettiford's "Oscalypso features the composer on cello for one of the finest solo outings in all of jazz on that instrument. 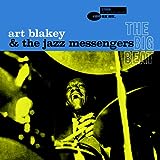 The Big Beat was the first Messenger date featuring Wayne Shorter to be issued on Blue Note and it paradoxically illustrates both how the band maintained its signature sound while changing with the inauguration of each talented new member. Shorter succeeded Benny Golson in the classic Moanin' quintet that also featured Lee Morgan, Bobby Timmons and Jymie Merritt and his harder edged, Trane influenced tone and burgeoning harmonically daring approach to the tenor gave the group a more fiery and modern temperament. Yet, the soulfulness of Morgan and Timmons still dominated the group's character, even on the saxophonist's own tunes. While this edition of the Messengers is often overlooked in favor of the ones that came before and after it, this date proves it to be one of the most satisfying groupings, fully evoking the toe tapping joyous simplicity of its predecessor on Timmons' "Dat Dere and Bill Hardman's "Politely , while forecasting the sophistication and inventiveness of the next incarnation of the group with Shorter's "Lester Left Town and "The Chess Players .

That next incarnation, arguably the greatest group of Jazz Messengers, is heard on Caravan. The band featuring Shorter, Freddie Hubbard and Curtis Fuller in the frontline with Cedar Walton and Reggie Workman joining Blakey in the rhythm section would produce some of the finest original jazz in the music's history. The date features Shorter's sadly overlooked gem "This Is For Albert and two takes each of the saxophonist's eastern tinged "Sweet and Sour and Hubbard's incendiary "Thermo , as well as creatively crafted arrangements of the Ellington-Tizol title track and the standards "Wee Small Hours and "Skylark . On all three discs Blakey's drumming, both as an accompanist and soloist is simply stunning.