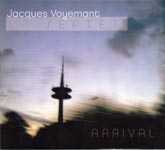 Just when it seems everything the trombone has to offer in a jazz setting has been heard, along comes a talent that demands a fresh hearing on its own merit. Jacques Voyemant is that kind of talent, and the group he has assembled provides a finely-honed voice, not only for his distinctive trombone sound, but for his writing skills as well. His name may be unfamiliar, but Jacques is no newcomer to the Los Angeles scene: he has been around for awhile, playing in the studios and pit and symphony orchestras around town; teaching at Cal State LA, Santa Monica College, and the USC Thornton School of Music (where he has been adjunct professor for more than a decade); and performing, recording and touring on six continents.

Jacques has also been leading his own seven-piece ensemble, comprised of some of the finest sidemen in all of LA. The group's debut, Arrival, was released in 2008, with all selections composed by Jacques (except the Japanese traditional "Sakura, Sakura," which he arranged), and they're a bunch of honeys. The hallmarks of the album are its pensive mood and rich, shared sonorities; no bone soloist's narcissistic tour de force this. Jacques shares melodic space with under-sung reedman Bob Sheppard, pianist's pianist Alan Pasqua, and vibraphonist Billy Hulting, and all amply reward the confidence with stellar performances.

"Desert Tale" and "Ephesus" abound in fourths and modal harmonies (the latter plush with Tull's and Kilgore's percussive effects and driven by the late Dave Carpenter's relentless swing—the CD is dedicated to him), while "Sakura," introduced with trombone and bass unison, is awash with percussive Japanese echoes and Sheppard's lilting flute. The wistful "Need for Peace" showcases Voyemant's rich resonance, together with Hulting's vibes and Carpenter's bass. Sheppard's soprano sax plays counterpoint, first with Jacques and later with Hulting in the haunting "Paradigm Shift." The title tune features introspective solos by Pasqua, Carpenter, Jacques, and Sheppard; it drifts tantalizingly in and out of different meters, including 5/4 and 11/8. "All Grown Up" is the most nostalgic tune yet, beginning with what sounds like children's playground chatter; Sheppard's tenor is heart-rending in its intensity.

Like a gentle breeze off the bahia, Sheppard's flute and the hypnotic Brasilian percussion sweep away moody clouds on "Brasilia"; Pasqua's brilliant solo is front-and-center, but the bittersweet echo of some forgotten love lingers. "Catalina Splash" returns to California, Kilgore's bongos underpinning trombone and soprano unison, solos, and the ever-cool sound of vibes without the vibe. The album ends in the only way it can: a gentle fade-out to a last few tinkles of the piano that ask as many questions as they answer.

Let him who despairs for the present and future of jazz listen well.