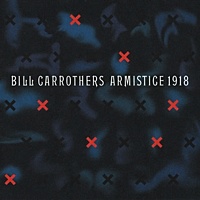 As we approach the hundredth anniversary of the start of "the war to end all wars," international conflict blights the planet like never before, and unilateral might-is-right aggression is increasingly replacing diplomacy and consensus. Bad karma rules and history sometimes seems, like the poet said, to be "one fucking thing after another."

So Bill Carrothers' Armistice 1918—a deeply affecting creative jazz suite about the horror and waste of the First World War, and by extension any war, performed by American musicians for a French label—is timely on two counts. Aside from being a musical masterpiece, the suite also reminds us that liberal, humanistic voices continue to be heard in the US, even if they have been marginalised by the neo-conservatives, and other reptiles, who have hijacked so much of the media in that country.

Already, deservedly, well-covered on AAJ—you can even converse directly with Carrothers himself on a Catching Up With... strand on the Bulletin Board—Armistice 1918, briefly and broadly, is a two-hour/two-CD work in three sections. The first disc, based entirely on popular songs from round about 1914-1918, covers the period of relatively carefee innocence immediately before the outbreak of hostilities, and the loss of that innocence during the first months of the war. The second disc, with most of the material composed by Carrothers, deals with everyday life and death in the trenches.

Most of the music is instrumental, performed by a piano trio, sparingly but tellingly augmented by cello, contrabass clarinet, and percussion. But eight of the thirty tracks feature vocals by Peg Carrothers, and these are important beyond their number. Her performances of "Keep The Home Fires Burning," "And The Band Played On," and other period pieces are hugely effective in conjuring up the era, while her beautiful, seemingly unschooled voice—straightforward and natural in delivery, pure in tone and texture, crystal clear and pitch perfect—of itself suggests the eternal human qualities of decency, love and compassion, the antitheses of war. Her "America, I Love You" has an especial resonance today. Ms. Carrothers closes the penultimate track, very movingly, with the lyrics: ..."There'd be no war today/If mothers all would say/I didn't raise my boy to be a soldier."

Understated, reflective and at times almost unbearably poignant, Armistice 1918 isn't a feel-good album. But it is, extra-musically, a morale-boosting and important one, and, musically, a sui generis jazz set.

There's A Long Long Trail A Winding; Hello Ma Baby; Let Me Call You Sweetheart; Cuddle Up A Little Closer; Say Au Revoir; A Call To Arms - On Moonlight Bay; America, I Love You; I'm Always Chasing Rainbows; And The Band Played On; Christmas 1914 - Silent Night; There's A Long Long Trail A Winding; I'm Afraid To Come Home In The Dark; Till We Meet Again; Roses Of Picardy; Evening Stand-To; Trench Raid; The Leaning Virgin Of Albert; Caissons; Rum Ration; No-Man's Land; Funk Hole; Birds On The Wire; It's A Long Way To Tipperary; The Rose Of No-Man's Land; A Rumour Of Peace; The Wait; Keep The Home Fires Burning; I Didn't Raise My Boy To Be A Soldier; Armistice Day.