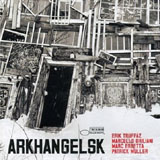 While Out of a Dream (Blue Note, 1997), introduced Erik Truffaz's now decade-old group featuring keyboardist Patrick Muller, bassist Marcello Giuliani and drummer Marc Erbetta, it was a decidedly straight-ahead post-bop affair. Since then, with that quartet and his guitar-centric Ladyland group, the Swiss-born trumpeter has moved increasingly further away from the mainstream, exploring the textures and beats of Nu Jazz, the influence of Middle Eastern, African music, and even a hint of fusion and head-banging rock.

Truffaz has used vocalists before, making Arkhangelsk appear to be nothing new. Rapper Nya has provided refreshingly intelligent flow to albums including the double live Face-a-Face (Blue Note, 2006), while Mounir Troudi has lent his Arabian lyrics to that set as well as Saloua. Still, Arkhangelsk is Truffaz's most overtly pop record to date, with Nya and French singer Christophe appearing on one track each, and British indie rocker Ed Harcourt singing on three of the album's ten tracks.

As has been the case since inception, Truffaz's piano-based quartet is a democratic affair, with writing credits shared by all, including the vocalists on their respective tracks. Less aggressive than The Walk of the Giant Turtle (Blue Note, 2003), and with far less delineated soloing, this group has always focused on groove and ambience, but never before on such clear song form, even on the instrumental tracks.

Arkhangelsk is also a considerably more relaxed album than Giant Turtle. The title track, with its reggae-like staccato organ and slippery bass line, is a piece of chill-out music with a singable melody from Truffaz's soft-hued trumpet. He does solo, but it is all economy and space, the beauty being in how he constructs appealing lines that remain in the air long after the song is over. Even more buoyant tunes like "Miss Kaba," with Muller's propelling Rhodes and Erbetta's soft but persistent groove, never break a sweat, while "Akiko," the album's brightest track, is still subdued by Truffaz's less-is-more approach.

Harcourt's three tracks are generally dark in both complexion and meaning, his voice in Dave Matthews territory, but "Red Cloud" opens up halfway through, the textures denser and the beat more assertive, before coming full circle at its conclusion. "Snake Charmer Man" is a soulful medium tempo ballad with a definitively catchy staccato piano motif and undeniable backbeat, while "Nobody Puts My Baby in the Corner" feels like a less world-weary Tom Waits.

Truffaz may be distancing himself from the jazz mainstream, but Arkhangelsk remains a fine record from an artist who's out to prove that a multiplicity of stylistic sources can still come together to create music that's light in ambience but unequivocally rich in substance.