By Trevor MacLaren
November 2, 2004
Sign in to view read count 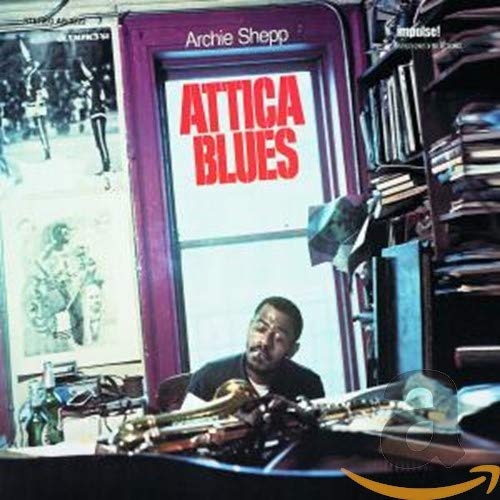 In November of 2004, the world stage is set on the American election. In a post-9/11 world the masses have become paranoid, tense and angry. At the forefront is George W. Bush's foreign policy. Thirty years ago artists found themselves in a similar plight with Richard M. Nixon's home and foreign policies as well. With the push of attack in Vietnam, the murders at Kent State and violence in urban areas and prisons, many felt the same disillusion that we feel now. With Michael Moore getting Peter Davis's genius 1974 antiwar documentary Hearts and Minds back in theaters, it is time to reevaluate the jazz's role as a vehicle of social commentary. None set the stage better that Archie Shepp's Attica Blues.

Never one to be close-lipped about his anger at U.S. society or its actions, Archie Shepp delivered Attica Blues on the heels of the Attica Prison massacre. Every time Shepp's breath hits the reeds he creates an emotional vibe which all of his records have displayed. Attica Blues has all his in your face sound even though he isn't ripping jagged shards as he had in the past. The record still displays emotional angst that is every bit as powerful and distraught as Davis's celluloid images. The tracks have the deep soul of all of Shepp's finest such as On This Night and Four By Trane. The difference is Archie utilizes the arrangements as the forefront while his horn simmers in the background like an angry voice needing to be heard.

Attica opens with the title track that jams urban funk while Shepp's chops ride underneath, one doesn't have to go much further to understand that Shepp has some new ideas up his sleeve. Moving forward from the palate of just free jazz, the title track employs a cornucopia of Afro-American music such as r&b and touches of gospel. The funk that chops out of this track is certainly a preview of the acid-jazz that groups like Groove Collective and Martin, Medeski and Wood would popularize in the 90s, but it certainly stands up to any popular funk that bands such as The Meters and Sly Stone produced in the same era. Although the subject matter is dark, the preparations are textured with upbeat styles.

Manipulating the big band swing of Ellington and using some heavy vocalizing on "Steam pt. 1" and "Steam pt. 2" the record has a groove unlike any other before it. Here Archie works up classic big band ideas and then lets his free jazz sensibilities to ride along within the two varying ideas. This may be an enigma to some, thinking how could two distinct styles, one pop and one raw, ever work? But man, he works it out and it is honey to the ears. Even the vocals recall the classic big band phrasing. Shepp also utilizes some spoken word tracks that add a tense tone to the record that can easily speak for this generation as well as his.

These tracks are short pieces except for the instrumental "Invocation to Mr. Parker";. The bits of poetry spoken portray the message of oppression whether in prison or in a society that preaches freedom but works to take it away. "I would rather be a plant than a man in this land/I would rather be a plant on this land/You can transplant a plant and it can grow free/But the man that's been transplanted can't/So you can why I'd rather be a tree with branches and leaves and grow free/If man had a choice before he is exploited then his offspring would do more than breathe/Isn't that a shame." - the spoken piece from "Invocation: Ballad for a Child". Tracks like this add some insight to pain that Shepp was relaying to the masses.

The highlight track, without a doubt, is "Blues for Brother George Jackson," written in memory to slain (many say murdered) activist/prisoner George Jackson, whose diaries Soledad Brother gave a frightful insight to the plight of African-American lives inside and outside of prison in the '60s to early '70s. The track is driven by a Isaac Hayes soul groove that features some of the most emotional and heartfelt playing this side of John Coltrane's A Love Supreme. Quite simply put this is one of jazz's finest moments caught on magnetic tape.

Certainly the most haunting and distressing track is the closer, "Quiet Dawn". Fl'gelhornist/composer Cal Massey's young daughter Waheeda sings here; her vocals are very raw and at points almost inaudible. On this closer she gives a ghostly vocal delivery, which gives the track an eerie and surreal feel that sums up an eerie era. Shepp would revisit these sounds on his next record, the equally genius companion The Cry of My People.

As Bush had brought his Texas death machine to the Middle East, Shepp's rally against oppression should bring about contemplation as they did following the slaughter of Martin Luther King Jr., George Jackson, Black Panther Fred Hampton and RFK. This exceptionally original record of protest left the hippies behind and utilized the guttural pain of a people forced to deal with the harsh realities of Nixon's America.