By DAN MCCLENAGHAN
January 31, 2021
Sign in to view read count 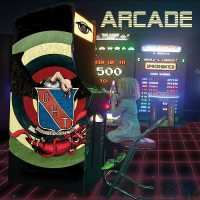 Johnny Griffith, saxophonist and synthesizer-ist for the Griffin Hiltz Trio (aka: GHT), says, in the midst of his midlife crisis, that "I can't afford a motorcycle, but I can make music." The music that he and his cohorts made, Arcade, draws its inspiration from classic '80s video games and movie themes. The music includes deep grooves and electro soundscapes, and brings to mind late'50s / early '60s exotica, plugged in and shifted into the space age.

"Movie Theme III: Transmogrification'' opens the set with alien planet exotica sounds, which shifts into "Do Not Engage," featuring Nathan Hiltz' guitar and bass pedals teamed with Neil Macintosh's muscular drumming, setting down a powerhouse rhythm. A subtle (synthesizer?) backdrop sounds like an undercurrent of cosmic rays, and Griffith's saxophone serves as the laser beams piercing deep space. This establishes, from the get-go, Arcade as a fun, engaging, modernistic listening experience.

"W.C.W." has an ominous feel, like something has gone wrong on the interstellar spaceship, sending the computer-based propulsion system into a wavering cry for attention. Or maybe it's a soundtrack of evil androids marching with an unwavering lack of machine-like self awareness on the Capitol.

"Ladies From The Eighties" gives off a wistful vibe, and Hiltz proves himself particularly adept at his synthesizer augmentations and undercurrents, while "An Another Day In Paradise" exudes a playful, arcade-ish atmosphere.

Arcade, was made in the summer of 2020, another Covid-19 lockdown album, recorded in "George's basement (and other basements, shacks and various locations)," and allegedly a laundry room. Geographical distancing of the band members was in play (Toronto, Sarnia and Halifax), attesting to the fact that the bumping of elbows and the rubbing of shoulders isn't necessary for the creation of good music.

"Space Hunter" is another high energy, nuclear-powered flight through the cosmos, and the brief "Movie Theme IV: End Of the Line" sounds like those marauding androids have broken out their laser pistols, to fire away.