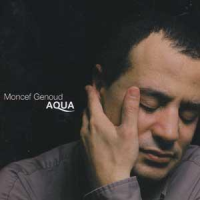 Though not as familiar a name as many of his contemporaries, Moncef Genoud promises to prove himself one of the major jazz pianists of his generation. Aqua, his tenth studio recording and first on the Savoy Jazz label, demonstrates his strengths as both composer and pianist.

The disc is comprised of seven original compositions and three covers interpreted with the help of such luminaries as Michael Brecker and Bill Stewart. Genoud peppers the covers throughout. The first one, "Summertime, features a funky backbeat courtesy of Stewart and a searching intro from Genoud. Melody is not a chief concern here; the focus of the arrangement seems to be rhythm and each player's sense of exploration within it. It is a daring approach which pays off fully. The next standard is Genoud's rendition of Coltrane's "Moment's Notice, which showcases his ability to play melodically and swiftly.

The third cover, and the final track on the disc, is Strayhorn's classic "Lush Life. Things start off promisingly enough with a thoughtful intro from Genoud, but guest vocalist Dee Dee Bridgewater gets one of the lyrics wrong right out of the gate. While ..."of the wheels of life instead of ...of the wheel of life may seem like a trivial mistake, it would follow that the next lyric would read ...to get the feels of life. It's a small error that is not repeated, but sadly, it took me out of the song. Bridgewater also uses an affected falsetto throughout which sounds too cutesy and not nearly worldly enough for the content.

Of the original compositions, all of which are meritorious, standouts include "Moncef's Mood, which allows bassist Scott Colley an opportunity to shine, and "Sliding Shadows. The latter, the most avant-garde of the leader's compositions on this set, opens with Genoud using the piano as a percussion instrument. It's a surprising turn and the results are mesmerizing.

The title track, "Aqua, has a melody just as fluid as its name would suggest. Brecker and Genoud create a dialogue in the middle of the piece that is rhythmically complex and unexpectedly aggressive after the top of the tune. The musicians work though this conversation, ending with a hint of the serene ideas that were present at the beginning. This is penetrating, thoughtful music of the highest order.

This all-star group of musicians, with Moncef in the lead, has created a stunningly creative and listenable record.