By MARK SULLIVAN
October 4, 2015
Sign in to view read count
Two recent ECM releases deal with the interface of folk and classical music, each in its own way. Imágenes presents classical piano music composed by Dino Saluzzi, a musician strongly associated with the Argentinian tango tradition. Komitas takes classical compositions based on Armenian folk music and reimagines them played on the folk instruments that would have played them originally. 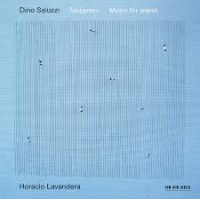 Argentinian bandoneon player/composer Dino Saluzzi is well represented in the ECM catalog. Many of his recordings are improvisational meetings between his playing and writing and jazz players, going as far back as Once Upon a Time—Far Away in the South (ECM, 1986) and Volver (ECM, 1987), his collaboration with Italian trumpeter Enrico Rava. His approaches to the classical performance tradition include duets with cellist Anja Lechner on Ojos Negros (ECM, 2007) and Kultrum (ECM, 1998) with the Rosamunde Quartett, his previous entry in the ECM New Series. All of these feature his bandoneon playing—that sound, as well as his writing, often make some reference to the Argentinian tango tradition, a style which straddles the worlds of folk and classical music.

But Saluzzi has also composed orchestral music. And it turns out that he has been composing for the piano for many years. The pieces presented here mostly date from 1984—2001, with one early entry from 1960. This music is solidly in the modern classical tradition: the ECM New Series is definitely the right home for it. This album is unique in Saluzzi's ECM discography in not featuring him as performer, ceding that role to young Argentinian pianist Horacio Lavandera. He has performed modernist composers Pierre Boulez, Karlheinz Stockhausen, and Mauricio Kagel—but this program does not reveal Saluzzi as hidden avant-gardist. More like hidden neoclassicist, along the lines of composers like fellow Argentine Alberto Ginastera, or Sergei Prokofiev.

It's generally calm, contemplative music, as implied by titles like "Imágenes" (Images), "Los Recuerdos" (Memories), "Romance," and "Media Noche" (Midnight). The mood is greatly enhanced by the pristine piano sound from Rainbow Studio in Oslo, with engineer Jan Erik Kongshaug—the source of many great ECM recordings over the years. There are traces of traditional Argentine music occasionally (notably in "Los Recuerdos," "Montañas," " Media Noche," and "Donde Nací.") But no one is likely to pick this out as Saluzzi's music in a blindfold test. It shows an entirely different side of Saluzzi the composer. 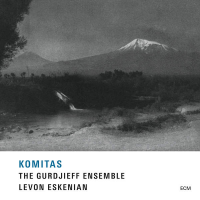 Komitas Vardapet (1869-1935) is revered by Armenians as a songwriter. But he was also a composer, singer, poet, ethnomusicologist, and collector of folk songs. Because of his ability to bring traditional Armenian music into a contemporary context he is often referred to as the father of modern Armenian music. His compositional practice involved selecting the most interesting variants of traditional melodies and rhythmic patterns as source material, recasting them into formal compositions while remaining true to the spirit and style of the originals. For this recording The Gurdjieff Folk Instruments Ensemble under director Levon Eskenian has rearranged Komitas compositions for an ensemble of folk instruments, as they did with the music of Gurdjieff on their debut recording Music of Georges I. Gurdjieff (ECM, 2011).

So it is a kind of reverse engineering, imagining what this music might have sounded like when first heard in traditional performance. The double reed duduk will be familiar to many World Music fans through the playing of Djivan Gasparyan. It plays a prominent role here, often in the traditional pairs. Other wind instruments include: pogh (a flute); zurna (another double reed instrument, with a more piercing sound than the duduk); and pku (a single reed instrument). String instruments: oud (a lute); kanon (a zither); santur (a dulcimer played with hammers); tar (a long necked string instrument played with a plectrum); and kamancha (a bowed string instrument played vertically, resting on the player's knee). Finally, the percussion section: tmbuk (a large double-headed bass drum played with wooden sticks); dhol (a small double-headed drum, slung across the upper body, played with wooden sticks); dap (a frame drum); burvar (a censer with jingles); and kshots (a silver plate with jingles).

Many of these instruments are used across the Middle East (often with alternate spellings). As in common performance practice in the area, the arrangements include various instrumental combinations with the ten players in the ensemble, from solos and duets up to larger groupings. None of the selections here employs the entire list, although "Msho Shoror" (the longest track) comes close. The arrangements were informed by references to traditional instruments Komitas made in the scores, and in some cases by recordings of Komitas himself performing them.

There are many moods here, but the dance is perhaps most prominent. "Msho Shoror" comprises seven dance sections, each with its own character, with the final martial section being one of the most striking. "Yot Par" is also a group of seven dances. The remaining selections include odes and folk songs. It would certainly not be necessary to know any of these details to enjoy Komitas. It's a beautiful, inviting look into a distinctly Armenian sound world. A companion recording of Komitas's music for piano played by Lusine Griogoryan (to be released in 2016) was made at the same time as this one, including many of the same compositions. It will be fascinating to compare the two.