BY DOUG COLLETTE
November 18, 2021
Sign in to view read count 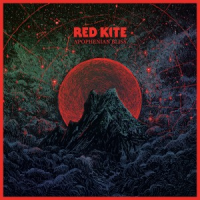 Even more so than on Red Kite's wholly excellent eponymous debut, the follow-up release, Apophenian Bliss, by this Norwegian quartet illustrates how fine are the lines between metal, prog and fusion music. The powerful dynamism this band commands generates thoughts of a more free-form version of the electric Return to Forever quartets, electric music for the mind and body that would be ideal as a soundtrack to an epic piece of sci-fi, while the disc's cover art (by Per Spjotvold) could function as a theatrical poster.

The clatter of Torstein Lofthus' drums introducing the forty-three plus minutes "Astrology (The One True Science)" is early evidence of Red Kite's shared agility. Theirs is an equitable creative arrangement within which the prominence of titular leader and baritone guitarist Even Helte Hermansen functions as a lightning rod for the other three players. Not surprisingly, the musicianship of the quartet is uplifting, not overbearing, no matter how loud it becomes: the cacophonous eleven minutes-plus of "Morrasol," along with the bookend of a closer, "Sleep Tight," is just one of the wry stories here. Such are the narratives that unfold through the seamless transitions in which, over the course of the six cuts, all the individual instrumentalists receive their due playing time.

To wit, bassist Trond Frenes and Rhodes pianist Bernt Andre Moen enact no clumsy tradeoffs, but rather display the almost indiscernible shifts from one man's showcase to another. Such nuanced interplay as that which dominates "The Immortal Coil," for instance, mirrors the subtlety of the arrangements. The crisp, signature tone of Moen's electric piano is at once complement and counterpart to Frones' assertive handling of his bass. And fully in keeping with the collective self- discipline of Red Kite's meshing textures with a fine eye (and ear) for detail, the keyboardist does not play any synthesizers, but instead confines himself to that single instrument; on the one hand, he is sufficiently judicious to add colors to the self-referential "Red Kite Flight," while on the other, he gleefully revels within the spacious likes of "Apophenia."

The latter title refers to that concept from which this album takes its name, specifically the tendency of the human brain to find patterns and connections even when none actually exist. Powerful in its resonance as is the playing of Red Kite—duly captured and preserved with unusual realism through the recording and mixing of Dag Erik Johansen plus the mastering of Espen Hoydalsvik—the foursome is an object lesson in the purposeful function of that mechanism. All four of these kindred spirits orbit around each others' action(s), thereby generating a warmth too often missing from similar musics. The foursome's reciprocal generosity ultimately culminates in the joyous end of a record by which the group simultaneously respects and transcends the core traditions of jazz.